On occasion of their Greek tour dates on June 2018 Metalpaths.com dives into the sinful yet intriguing past of Britain’s metal extremists CRADLE OF FILTH. From their formation back in 1991 up to their latest release “Cryptoriana- The Seductiveness of Decay”. Welcome to our time machine.

The year is 1991 and we are in Suffolk, England where all flesh became evil with the formation of Britain’s answer to the wave of black metal coming from the northern part of the continent of Europe. CRADLE OF FILTH are born and their black metal style which is no match to other bands’ style of the same genre, gradually evolves into something unique and special.

Being musically influenced by bands like VENOM, SABBAT and IRON MAIDEN and with lyrical themes and imagery influenced by Gothic literature, poetry, mythology and horror films the band releases their debut album “Principle of Evil Made Flesh” in 1994 via Cacophonous Records. The compositions in here being rather raw in mix and in entity, though doing their first impact in the underground scene.

Summer Dying Fast (The Principle of Evil Made Flesh)

Two years later, in April 1996, contract obligations/conflicts force the band to release an EP under the title “V Empire or Dark Faerytales in Phallustein” or simply “Vempire”. The EP set the standards for the band’s sound to another point which would gradually form the style for which they became rather famous for.

While several months later that year (August 1996) and after jumping to the roster of Music For Nations CRADLE OF FILTH release their second studio LP “Dusk And Her Embrace” which really sook the foundations of how extreme metal would sound from then on and would also form their own sound for the next albums, leading them to success and inspiration zenith.

Haunted Shores (Dusk and her Embrace)

After a successful tour supporting the release of “Dusk and Her Embrace” the band returned on May 1998 with their third LP “Cruelty And The Beast”. A concept album which is based on the legend of the Hungarian “blood countess” Elizabeth Báthory. A well-structured album both musically and lyrically which gave them the push they needed for international fame and recognition of their talent and uniqueness which was rather doubted up to that time.

Bathory Aria (Cruelty and The Beast)

Following the alignment of stars which helped them with “Cruelty and The Beast” CRADLE OF FILTH sound unstoppable and their fourth record release “Midian” seems to prove their fame and worldwide recognition, being a global commercial success with their style and music being rather more simplistic and direct they approach mass audiences and take their metal band status to another level. “Her Ghost in the fog” would be their second video which would receive heavy rotation via MTV2 and gradually make them a mainstream extreme favorite.

Her Ghost in the Fog (Midian)

“Bitter Suites to Succubi” which follows in the line of releases was the band’s first release on their own Abracadaver label, and according to the band it actually was a “transitional mini album, essentially an EP”, bridging the gap between “Midian” and their fifth LP release “Damnation and a Day” while the band negotiated their label change from Music for Nations to Sony Records. It featured six new compositions but it reached album-length duration with three remakes of songs from their debut album “The Principle of Evil Made Flesh” and a cover of the song “No Time to Cry” originally by the gothic rock pioneers SISTERS OF MERCY.

Born In A Burial Gown (Bitter Suites To Succubi)

Released on March 2003 “Damnation And A Day” is their only album on a major label (Sony Records). It features the forty-piece Budapest Film Orchestra and thirty-two-piece Budapest Film Choir. A rather great composition advancement, the album is partly based on John Milton’s epic poem “Paradise Lost”. Receiving rather mixed response from critics it set a new sound carpet for the band’s next couple of albums.

Better to Reign In Hell (Damnation and a Day)

Their sixth LP “Nymphetamine” released on September 2004 widened the CRADLE OF FILTH fan base even more towards the gothic metal admirers. Receiving rather enthusiastic critics worldwide, CRADLE OF FILTH set with this album yet another unique mark on the genre of Gothic/atmospheric extreme metal like no other band. Giving a wide range of soundscapes for the audiences to explore.

“Thornography” their seventh studio album released on October 2006 received mixed critics which had to do with the album’s disorientation. A rather heavy guitar dominated release in years that would be considered rather one of the band’s first miss-steps.

The Foetus of a new Day Kicking (Thornography)

“Godspeed on the Devil’s Thunder” released on October 2008 marked their eighth full length release while being their first album as a four-piece, rather than its usual six-man staple. Receiving rather well critics worldwide, it remains one of their heaviest and fastest releases to date.

Forgive Me Father (I Have Sinned) (Darkly, Darkly, Venus Aversa)

“The Manticore and Other Horrors” their tenth LP album was released on October 2012 and was the band’s first and only album, so far, as a three-man group rather than its six-man staple. Receiving mixed critics on the band’s repetition of themselves, the album sees the band a bit confused and rather troubled.

Frost on Her Pillow (The Manticore and Other Horrors)

Their eleventh studio release “Hammer of the Witches” released on July 2015 was their first release featuring the band’s new line-up once again as a six person act. This release was defined as a “comeback to the roots” album by many critics and sees another bright glimpse for these dark messengers of evil.

Blackest Magick In Practice (Hammer of The Witches)

Finally, reaching their latest release so far, twelfth in line, we have “Cryptoriana – The Seductiveness of Decay”. Released on September 2017 it marked the comeback succession of “Hammer of the Witches” both on critics and fan reception. Blending all of their carrier’s elements equally the album sounds oriented to the milestones of their own sound and the band sounds as a well-tuned machine that has yet a lot to offer us in the future.

Heartbreak And Séance (Cryptoriana –The Seductiveness of Decay)

The album’s release led to an extended tour that is about to visit Greece after many years. CRADLE OF FILTH will be performing in Thessaloniki on Friday 1st of June 2018 at Principal Club Theater and in Athens on Saturday 2nd of June 2018 @ Gagarin 205. For all of you metal extremists this will be a night to remember, so be there! I’m sure we will! 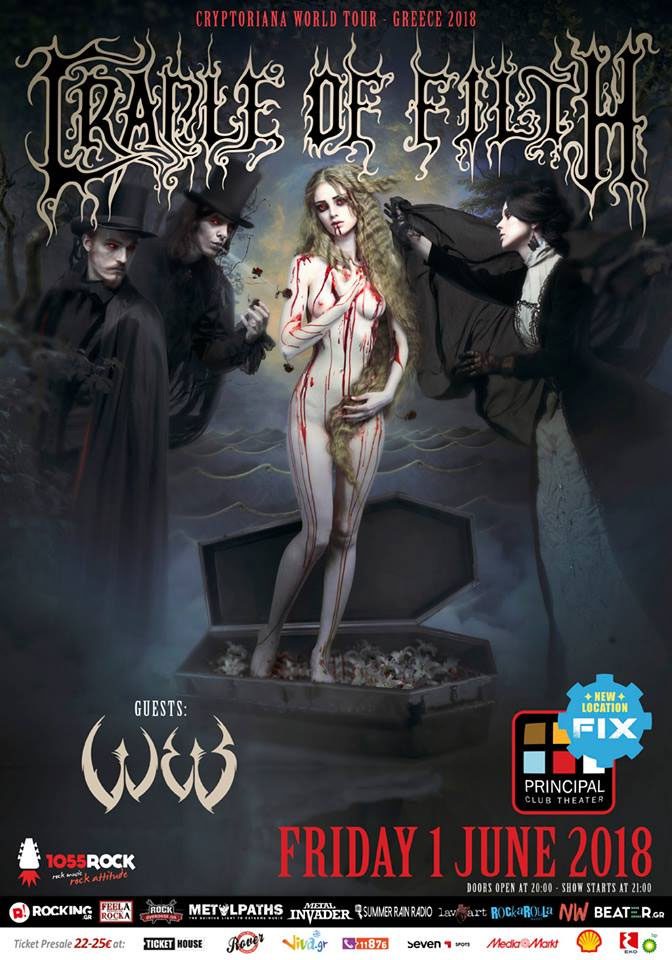