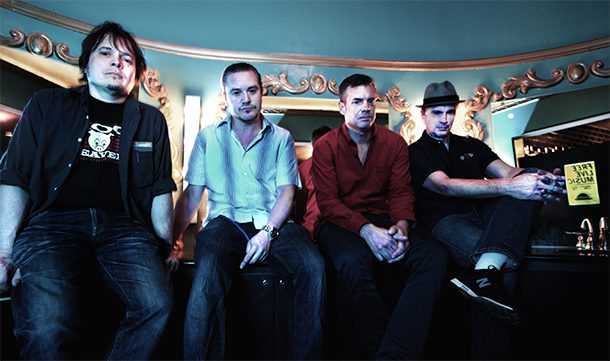 After a long break since the release of their latest release in 2007, Mike Patton and his friends return with the new Tomahawk record “Oddfellows” which has been released on January 28th. The other founding member of the band, Duane Deninson explains at Metalpaths the reasons of the long-waiting until the new album, what’s the process of a Tomahawk record to be created, the new bassist of the band, his influences and future plans!…by Logan Chevet 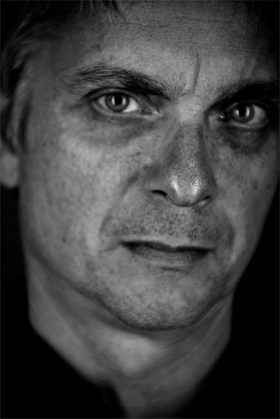 So in a few days the new Tomahawk album will be released (the interview conducted 3 days before the release of the album) six years after your previous one. Why did it took you so long to make a new album?

Well everybody had other projects, and then there was interruptions from member reunions tours like Faith No More’s tour , and then our drummer John Stanier’s band.Battles got popular….so all those things. It was hard to work along all that, but you know we kept in touch and it seems that last year we all got enough time to get together and work on material. And it actually work well for me, from a writing standpoint because it gave me time to accumulate good material, so I had time to write home demos, listen to them and think about it and then we had a lot of stuff to pick from for the album and I think it helped.

From the first hearings I noticed a darker approach in the album. Is it the idea behind the whole album?

No  don’t think so, I think they are lighter moments as well. There are sort of comic relief or sort of inner texture, major keys, but most of what we do is fairly dark, hard and heavy. We haven’t change that much though. We have done a few other things, tried to reach out through different people because as you said it’s been a long time since our latest album and we don’t really know for sure right now who the audience is, so we have to try a few different things.

In your opinion which are the main differences between the previous albums?

Each album had it’s own personality or vibe you know, and usually when you start recording it starts to pick up its own personality as you go. In the first album we were sort of finding ourselves like a teenager, and in the second album we were like a yon person in his twenties sort of, still in between worlds, part being an adult and part still a teenager, kind of reckless and wild. The third album That was kind of a detour from the other albums.

In a way yes. Our version of should I say alternative historical fiction.

“Stoneletter” has already been released via youtube with very good feedbacks from your fans. How you decided to make it the promo song of the album?

It’s just a catchy accessible song that wasn’t too complicated in a sort of way like the other songs of the album. And we still trying to bring more peep to our sic so it was the best choice.

Do you plan to make another video?

Not really. we got some footage here and there and we put out a teaser in youtube of Oddfellows the title track. We gonna be busy touring so we don’t see how could fit that in. Maybe if someone will make it for us, if some famous film director will step in. Maybe Quentin Tarantino….hahaha

This new album features a new bass player Travor Dunn. What was the musical impact of a new player?

Trevor i such a good all-around player and he learn so quickly and he is so easy going it was a really easy fit. very Comfortable and it didn’t take long for him and John to click and make a sold rhythm section right from the first time we rehearsed together. It feels great. He’s kinda giving the band new energy.

Tell us a few things about the process of creating a Tomahawk album. How do you work together as a band?

Well we have a typical method. I start off and write a few sketches and then I make a home demo and then I send it out to Patton and Stanier. The make the same, we discuss the changes and so on it keeps moving that way. Eventually Patton will take them and put vocals, keyboards and samples and then he’ll send it back to me and i’ll send some feedback. So when we get for rehearsal, like for Oddfellows we were rehearsing about a week before going to the studio, we make all the final arrangements, all the last minutes tricks. So by the time we go to the studio we pretty much have a final approach of how we are going to play it. And we sometime track live like this time in easy eye studio we were al together in the same room recording. Which was great. That’s how it works.

How difficult it is to separate Tomahawk work and the other projects each one of you have? 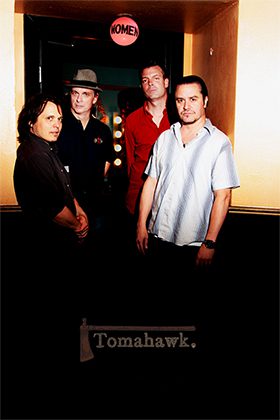 I think it’s pretty easy actually cause everyone has a very different project rom Tomahawk. Tomahawk is where we want to just rock out. Really wanna rock out and have fun. Rock is supposed to be fun and exciting and that doesn’t mean that we do it stupidly. I think it’s pretty interesting and fun. But you know this is a point in our lives when we just want to rock out so it’s pretty easy to keep it separate.

So how would you describe Tomahawk in a few words?

What are your main influences?

Well I listen to a lot of different stuff, I always had and I probably always will. Like today for example I had to drive my daughter to school this morning and on our way we listen to some rockabilly. And then back home I listen to the Chronos string quartet. And then I listen to the band Secret Machines. That so far today. Tomorrow it may be some jazz or a soundtrack.

The right way to listen music

Yes exactly. I think when you are younger you tend to occur on a specific kind of music, but when you grow older you start thinking maybe you missed something or things you overlooked.

Ater the release what are your plans as a band?

Any chance to see you in Greece?

I don’t know…In all my years I never been to Greece, never played a show there, nothing. I would love to play and make a show there in Athens. Oh did you know, I live in Nashville Tennessee, that we have a model of the Parthenon in a park in down town Nashville?

Haha I had no idea…

Oh yes. We have our own Parthenon. It is very new and in good shape. I think it’s much better than yours! Hahaha

Last words for the fans.

Cross your fingers, write to your local politician and demand Tomahawk to come to Greece. Call the United Nations and tell them: “We demand that Tomahawks come to Greece”

We will definitely! Thank you very much.

Thank you for your time