[colored_box color=”yellow”]“Paradise Lost is like a wife that I have for many years. Vallenfyre is like my mischievous younger brother…”[/colored_box] 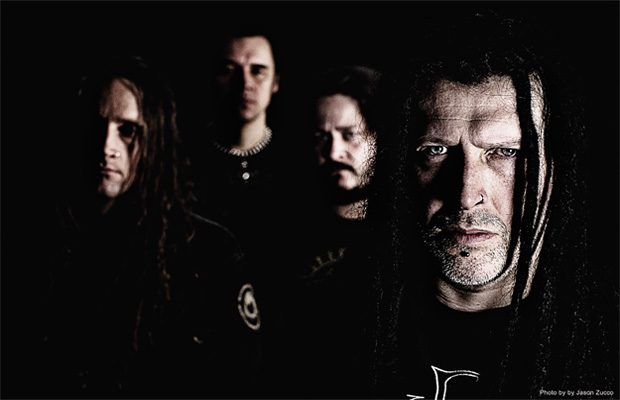 Vallenfyre; the death metal side project of Greg Mackintosh (Paradise Lost) release their second album “Splinters” via Century Media Records and Metalpaths grabs the chance to talk about it and many other stuff, including tour infos and other band plans as well as intelligence matters and death metal in general.. Enjoy this sincere conversation with the man himself, Mr. Greg Mackintosh only here on Metalpaths.com!

Welcome to Metalpaths it’s really a great honor to have you here with us. “Splinters” has already been out for a few days, could you describe us the feedback for it so far? 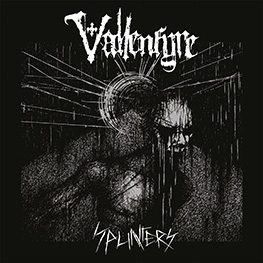 Well, I’m only looking online and getting/reading reviews etc. and what people are posting on our Facebook and I guess the label are telling me things. It’s all been good so far I think, you know, I haven’t seen anything too bad. Most people seem to think that it’s a step in the right direction from the first one. It’s taking it a little bit more extreme, developing the sound of it more, I think everyone seems to get it.

Yeah, that’s nice because it really sounds more obscure and extreme as you said. “Fragile King” was a personal state for the loss of your father, as I remember, hopefully “Splinters” is not connected to such harsh times, is it?

Oh, no, not really. I mean there’s a couple of tracks in there, there’s one called “Bereft” and the titletrack “Splinters” they’re both about grief I guess, about grief in longterm , but the rest of the album is about many different things. Like addiction, self-meditating, mental illness, society, greed, consumers, just anything that pisses me off really.

I’ve spotted some religious staff in there. Mentions to Christ..

Yeah, I’m an atheist. I was brought up as an atheist,  my father was an atheist. I just have a problem with it. I don’t see a need for it in today’s society. I think it should have been left in medieval times. 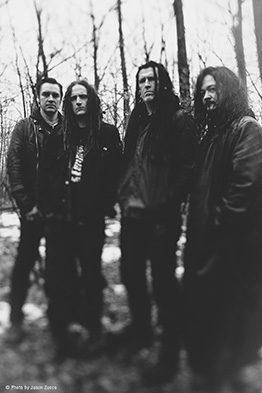 What was the main reason for the second coming of Vallenfyre in such short time?

Well, it’s been enough time. I mean, the first one came out in the beginning of 2011 I think, so it’s been over three years. I think we did a few shows after the first record, and we short of said goodbye and went to our usual bands. Then maybe about a year later a couple of guys from Vallenfyre came back to me, Scoot and Andrian, and said to me “do you think we should write some more stuff and if it’s good enough maybe we think about another record?” So, I started to write some stuff and get some ideas from the other guys and we just put some stuff together but not with an album in mind. Just to see if we could put up anything we thought was good enough. We got some good ideas together, with an outline plan to make it more extreme, slower, faster, angrier etc. and develop it a little bit. Then we got enough songs that we thought “Yeah, this could be a good record” so then we approached Century Media, and told then we’d like to do another record. Nothing is ever planned with Vallenfyre, it’s like we don’t do it day by day that short of thing…

Inside the album I can listen/ hear some pretty rough takes. The squalling of the guitars, this captured, raw feeling. As you just explained, this is how you want to sound…Pure death metal the old school European way.. How long took the band to record this album?

To record, we did it in three weeks. We went to Salem, Massachusetts in America where we all lived in a house near the studio up to three weeks just spending every day recording it. We’ve written all the songs before we went in the studio. We made a plan to play around the songs very loosely so that things changed while we were in the studio. So, they sounded more spontaneous. We wanted to do a very “live” sounding record, that was the idea. There’s no real editing. There’s no drum editing. We have these minimal takes. We wanted just to get the right take. That’s the reason we got Kurt Ballou involved, we just wanted to make a record that had a good feeling, a good vibe. We didn’t want to make a perfect record you know! Most of the records I listened to when I was growing up, were full of imperfections but that’s what made them endearing some other time. So, we kind of wanted to make a record like that. It just felt like it, we walked in the studio and make it. 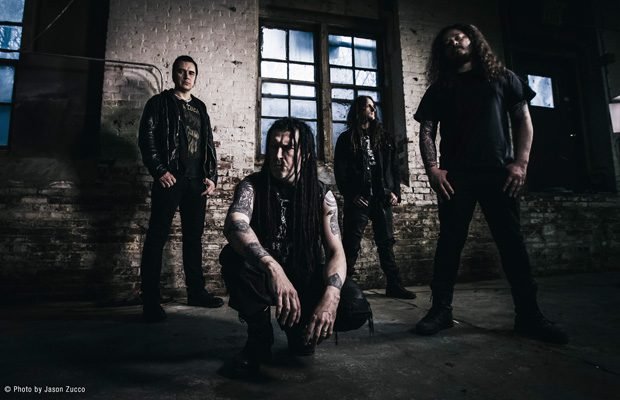 Was anyone else involved in the writing process? Or was it just you?

Well, I did the majority of it, but this time around we were all involved in it from the start. On “The Fragile King” I basically wrote everything even before we became a band. I was kind of locked away in a room doing it, which was fine at first but then it became a little bit oppressive I think. This time around, it was more free and much easier. The other guys giving me ideas and feedback all the time and everyone kind of playing around as we went along. I wrote most of it but I think it’s a very mature band effort as the whole album is. Things changed when we were in the studio. We got everyone’s personality on the record. Make sure that you could hear who was playing on the record, who was creating it.

Yeah, that’s exactly what it is. That was important for us to get across on this record. 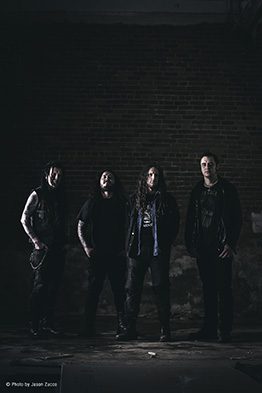 You got that out, that’s for sure.. I’d like to ask you something else. I have this first limited edition of “Splinters” on red vinyl and I’d like to ask you your opinion about this whole “back on black” thing concerning the music industry going back to vinyl record cutting. Do you think it’s inevitable in order to save an admittedly dying industry? Or is it just a trick for collectors?

I don’t think it’s a dying industry. I think that cds die now thus being replaced by digital downloads I guess. I think vinyl made a comeback because there’s whole generations of people that never got into vinyl in the first place and they’re realizing what a great medium it is. It’s something you can touch and hold and it’s not that had to do with the cds. You don’t have a jewel cover that breaks as soon as you open it. I think it’s a great medium. I think it will always be around. I actually think when you master for vinyl, which this record has been. A lot of people cut their records on vinyl, but it’s been mastered for digital…we did a separate mastering for vinyl. I think that when you master for vinyl you can really hear a great difference.

As a sound engineer myself, I can really descriminate the sound coming from digital and your processing on “Splinters” that way really blew my speakers out… 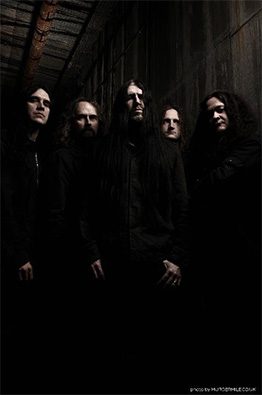 Because it was really loud, but it’s nice!! It’s meant to be that way..

Yeah, yeah because like the old days you had to make the length of the album a certain length on each side to get the maximum volume out…So yeah, I think that it’s cool that it’s coming back that way around.

I like it myself as well… Since day one, Vallenfyre was introduced as a side project of yours with some friends surrounding you..Does it still remain such way? Or Vallenfyre has grown larger in your thoughts or ambitions in a way?

I’ll describe it in this way. Paradise Lost is like a wife that I have for many years. Vallenfyre is like my mischievous younger brother. Vallenfyre has a lot of fun, it’s very chaotic, nothing is ever planned. Paradise Lost is a very well organised, smooth running thing that I do. So, it’s like two sides of my personality, I don’t think the one more important than the other. I think of them both of something I enjoy! I need to get out, so why differenciate instead of getting joy of something.

Alright, I understand. I have to admit that when I saw the “Splinters” artwork , it really got me into this old school thing. The material in it though was even more “in your face” than in “Fragile King”. How do you imagine your third coming?

I don’t! I mean it’s way too…I don’t make plans to do another record. I didn’t have plans to do a second record. I mean, never say never…But at this moment in time I think that we’ve accomblished what we need for this moment in time with Vallenfyre so we just want to get out and play some shows and that’s again quite difficult because of everyone’s schedule.. Andrian is like in 500 bands and you know..

It’s kinda difficult to organise it all. We are putting things together now, we are gonna organise a couple tours so it’s nice to get some gigs before thinking about doing anything further. 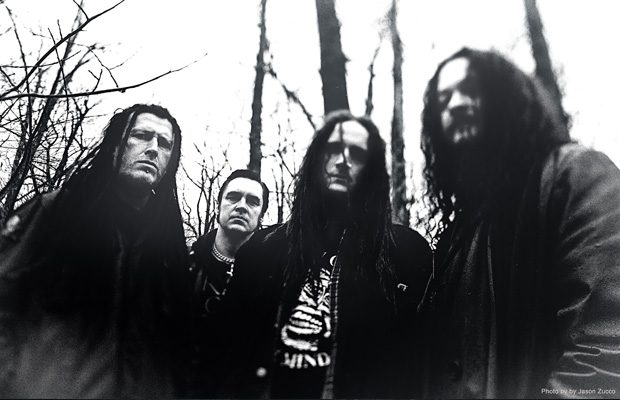 So, these are your plans for promoting “Splinters”? Have you planned a full tour or is it some shows as you did for “A Fragile King”?

It’s gonna be some shows like we did with “Fragile King”but then we want to do a couple of tours here and there. In september we are looking on going out and doing a small, like a week or so european dates , and then maybe a month later we’ll do another week and then do a couple of shows in America and then next year we are gonna go to America for a short tour – I think a couple of weeks tour- and we are trying to do some flying shows like you know. It would be nice to be able to go obviously to Greece for example or to Israel..

That was a question of mine..

Yeah, mainly it depends on promoters. 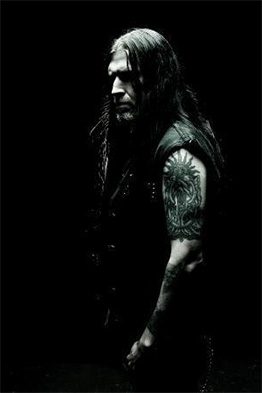 As a vocalist is very much I guess the old school gutteral deep growl like Karl Willets from Bolt Thrower, or Chuck Schuldiner (Death) or I guess Kam Lee to a degree or you know some of the early gutteral death metal vocalists but I try to mix it in with a little bit with a hardcore spin in it. Also, I try to make it very listenable so you can hear what I’m singing about because when I was growing up I heard death metal but I prefered the lyrics from the hardcore/ punk scene because it was kinda more realistic. It was something I could identify with. A lot of the death metal lyrics were a bit silly! So, I try to blend the two a little bit on that level where it’s a death metal band that’s trying to get across lyrics a bit more intelligent hopefully! A little bit more real!

Yeah, I guess it might be too real to some death metal people! But it’s more interesting to me, for me to do, you know so…

All right Greg, I won’t bother you anymore! Thank you for your time and Metalpaths wishes good luck to everything Vallenfyre hold for their future! Give us an epilogue yourself!

I would say, hopefully that we’re gonna get to Greece sometime this year or early next year and that depends on people like yourself! Get us over there!