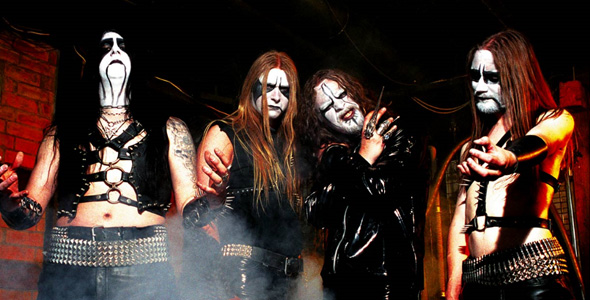 “I guess it’s about time to let you guys know what’s going on here. Well, we are currently working on material for a new full-length album. We’re in the very early stages of the writing process though. There’s still a lot of work before we’re ready to hit the studio, but we’re on the right course at least! Plan is, however, to be ready to record a new album sometime during 2008, with a possible early 2009 release (but it all depends on when we’re ready to record and so on, of course). We will keep you posted on the writing progress and what kind of time plan we’ll put up for the new album. We have also renewed our contract with Regain Records. So we will be releasing the next album through them too. In the meantime, and during the wait for our new studio album, we would suggest that you check out two killer DVDs that we have released, ‘Attera Orbis Terrarum’ parts 1 and 2 (part two will be released on May 22). Also, keep your eyes open for the date when we’ll launch our webstore ‘Diaboliswear!”

DARK FUNERAL’s second DVD recorded during the band’s world tour in support of the “Attera Totus Sanctus” album, entitled “Attera Orbis Terrarum – Part 2”, focuses on South American shows, where the band has a fanatical following. The first DVD, “Attera Orbis Terrarum – Part 1”, which landed on the Swedish DVD chart at No. 5, contained footage from the European leg of the band’s world tour. The two-disc set includes three complete, professionally-filmed live shows and rare bonus footage. The first show was filmed with seven cameras on March 12, 2005 in Katowice, Poland. The second was filmed the following March in Tilburg, The Netherlands with four cameras. The second disc starts off with a camera-shot show from March 2006 in Paris, followed by the video clip for “Atrum Regina” and previously unreleased amateur footage that chronicles the Swedish black metal band’s entire career, including the very first, and now legendary, show in Oslo, Norway on May 4, 1994. The total combined running time for the two discs is nearly four hours.