IN FLAMES Guitarist Talks U.S. Label Switch, GIGANTOUR And AT THE GATES Reunion 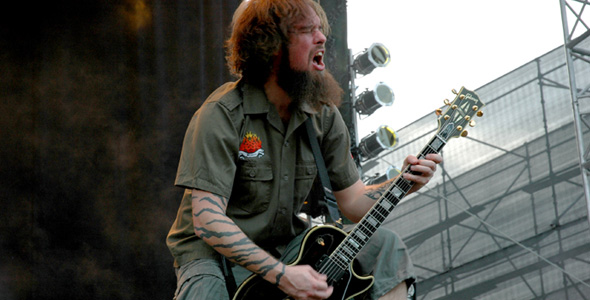 Chad Bowar of About Heavy Metal recently conducted an interview with IN FLAMES guitarist Björn Gelotte. A couple of excerpts from the chat follow:

About Heavy Metal: What can fans expect with “A Sense Of Purpose”?

Björn Gelotte: “It’s awesome. It’s energetic, melodic, pretty much in the same vein. But we always try to mix it up a bit and try to put some dynamics into the songs, even though they are very intense. If you’ve heard the previous ones, you pretty much know what vein we’re going to be. It’s just a matter of small experiments in different songs.”

About Heavy Metal: Your last CD “Come Clarity” was very successful. What are your expectations for “A Sense Of Purpose”?

Björn Gelotte: “I don’t know. We don’t really think that way. I just hope that we can come out on all the tours we’ve planned for this album. That’s really what I am hoping for. We don’t really have expectations. We’re already happy with the album, and that’s the hardest thing for us. When that’s done, it’s like a big sigh of relief.”

About Heavy Metal: I understand you recently built your own recording studio in Gothenburg.

Björn Gelotte: “It’s more like we obtained a studio [the former Studio Fredman location] and we remade it a little bit. It’s a classic studio that’s been here for 20 odd years. It’s been in different people’s hands. We swapped out most of the equipment and remade the whole kitchen area and the areas to a band that are important, but as a studio technician you couldn’t care less. Those areas we really improved to make sure it’s a comfortable studio. It was a great experience recording in our own studio made for our sound and our own specs.”

About Heavy Metal: Do you plan on using the studio exclusively, or will you rent it out to other bands when you’re not using it?

Björn Gelotte: “It’s definitely for any band that wants to record there. It’s not a rehearsal space turned into a studio, it’s a built studio. It would be a waste to put in all this cool equipment and made it comfortable for bands if it wasn”t used. It’s open for everybody.”

About Heavy Metal: You switched U.S. record labels for this album, going from Ferret to Koch. How come?

Björn Gelotte: “We used to be on Nuclear Blast. It never really worked out that well for us in the U.S. because they were sort of underneath the umbrella of Century Media at that time, and that didn’t give them the weight they needed to reach the right people for distribution and stuff like that. We’re really focusing hard on the U.S. We try to tour there as much as possible. We understand that it’s important to tour there, so we try to do that. It didn’t really work out with them. So when we talked to Ferret for the last album, they really helped us out and they really knew how to put us on the right tours and get us in contact with the right people. We did four U.S. tours for ‘Come Clarity’. That’s a lot of touring considering we have all the festivals and all the touring we do in Europe. It was a great cooperation with the Ferret guys. This time around we were open for a contract again and said we’d love to continue working with you, but we want to see who has the best ideas of what we can do to take this another step. Times are really changing when it comes to different media and putting out the music. We need some cool ideas to be in people’s faces. In the end Koch came up with the best ideas and we really liked them. That’s the way it ended up.”

About Heavy Metal: Are you looking forward to playing on Gigantour?

Björn Gelotte: “Yes, we’re really looking forward to it. Two of the bands we’ve never toured with, JOB FOR A COWBOY and HIGH ON FIRE. CHILDREN OF BODOM we’ve toured with several times and know those guys really well. MEGADETH has had some highly influential albums for me guitar-wise. Some of their songs are as good as it’s ever going to get. It’s going to be a great tour.”

About Heavy Metal: What do you think about the AT THE GATES reunion?

Björn Gelotte: “From a personal point of view, I’m stoked. It’s going to be awesome. I love AT THE GATES. ‘Slaughter Of The Soul’ is one of my all-time favorites, ever since I heard it for the first time. It really sets the standard for what’s possible studio-wise and music-wise. It’s going to be awesome to see them kick ass again. I never got the opportunity to see their original lineup. On a professional level, it feels like it’s a bit too late. They should have done this earlier. I hope they try to stay together for a longer period than just this summer.”

About Heavy Metal: What do you think is the most underrated IN FLAMES album?

Björn Gelotte: “There was a period when we all of a sudden became sellouts in people’s opinions. We didn’t change anything musically, the only thing we did was go on a tour with a band called SLIPKNOT. It changed everything. Perhaps the ‘Reroute To Remain’ and ‘Soundtrack To Your Escape’ didn’t get the credit that they deserve. But I don’t really pay attention to that, because I’m super-happy with both of those albums. It’s hard enough for us five to agree on what’s good or not. We’ve been constantly growing, more people are coming to the shows and are interested in the band. We tour more than we ever did, and we’re doing something right.”

Read the entire interview at About Heavy Metal.