Sepultura To Release ‘A-Lex’ In January 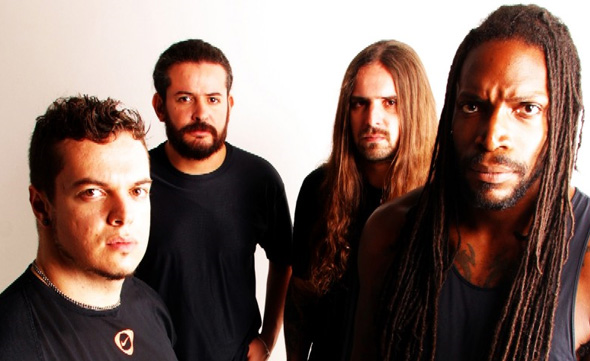 Brazilian thrashers SEPULTURA will release their new album, “A-Lex” (which stands for “no law” or “without law”), on January 26, 2009 via SPV Records. The CD, which is based on the Anthony Burgess novel “A Clockwork Orange” (later turned into the classic film by Stanley Kubrick), was recorded at in São Paulo, Brazil at Trama Studios and was mixed at Mega Studios. According to SEPULTURA, the follow-up to 2006’s “Dante XXI” features 18 songs with a total playing time of 60 minutes and was completed in record time because it is basically a recording of the band’s studio jams captured over a three-month period.

SEPULTURA’s forthcoming CD will be the group’s first to feature drummer Jean Dolabella, who replaced founding member Igor Cavalera in 2006. Igor has since reunited with his brother and former SEPULTURA frontman Max Cavalera in CAVALERA CONSPIRACY.

Check out the “A-Lex” cover artwork below.

Photos from an August 2008 “A-Lex” listening session, which was attended by members of the music media, can be found at this location.

SEPULTURA guitarist Andreas Kisser will release his long-awaited solo debut, entitled “Hubris I & II”, in 2009 via Holland’s Mascot Records. A two-disc set, the self-produced effort was recorded in part at A Voz do Brasil studio in São Paulo, Brazil.

Kisser previously stated about the album, “I’m very pleased with the result and I’m excited to hear it all done. It was a long process, a learning process and a great experience. It’s a musical journey trough the influences I had for last 15 years of my life and at the same time it’s very different from everything I did so far.”