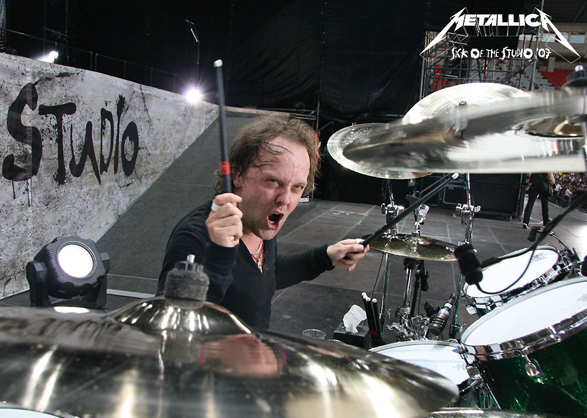 METALLICA drummer Lars Ulrich, who angered many fans by waging a high-profile battle with Napster in 2000 over illegal music downloading, admitted in a recent interview that he has also used the Internet to obtain a full album’s worth of music without paying for it. “I sat there myself and downloaded [METALLICA’s latest CD] ‘Death Magnetic’ [illegally] from the Internet just to try it,” he told Eddie Trunk of VH1 Classic’s hit series “That Metal Show”. “I was like, ‘Wow, this is how it works.’ I figured if there is anybody that has a right to download ‘Death Magnetic’ for free, it’s me. I sat there one night at my house with about six of my friends and a bottle of wine. And what was it called?! [Trying to think of the name of the file-sharing client he used to download the album] We found it — this was like two or three days after [‘Death Magnetic’] leaked. I was like, ‘You know what? I’ve gotta try this.’ So we sat there, and thirty minutes later, I had ‘Death Magnetic’ in my computer. It was kind of bizarre.”

In a 2003 interview with Launch, Lars about the band’s battle with Napster, “Most of the time, it’s like a bad dream, like what the fuck was that? [Several] years later, it’s like did that really happen? We went from being somewhat well-respected, well-liked, and then I woke up one day and all of a sudden I was the most hated man in rock ‘n’ roll. It was like, huh? Me? What did I do wrong? I’m one of the good guys. That was all kind of weird. If you look at our history, we’ve always been pretty protective of our own shit. When anybody got too close or fucked with our shit, we always took action.

In retrospect, I’m proud of what we did, I really felt sideswiped on that one. In my own little ignorant world, I didn’t see it coming. I was completely ignorant and unaware of the magnitude of this issue for people. I was just sitting there in my own little selfish world going, ‘I’m going to protect METALLICA. Don’t fuck with METALLICA.’ Then (explosion sound), ‘You’re pro-record company, you’re greedy!’ I’m not pro-record company. We invented being anti-record company. We told our record company to go fuck themselves before anyone else. Stop. It was a very surreal thing, because it was so hard to connect what I read about myself and METALLICA, it was so abstract to what was on my radar about my own reality. People going, ‘You’re a really greedy little man.’ It was like, what are you talking about? We’ve been giving shit away for years. We want to be the ones giving it away, not someone else. I’m proud of the stance we took. It was a very tough time.

It was a much tougher time, because in the middle of that you have to put your best game face on. It was difficult. A lot of that shit hurt and it was very bewildering because it was difficult to connect it to your own reality. For better or worse, it got a good debate started. In retrospect, I’m not claiming any sort of victory — who gives a shit about that? — I think more people are starting to realize, not that we were right, but this is an issue that is changing the face of everything that is going on. Not only the music world, but the film world is next. What better way to deal with it than at least educate people about it. If nothing else, I look back at the six months in 2000 as the first step in the education.”