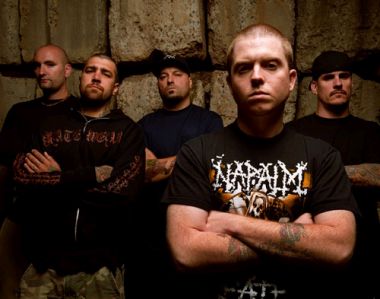 Jamey Jasta of the hardcore/metal band HATEBREED has issued the following update:

“HATEBREED played a last-minute show in Springfield, Massachusetts last night; we had a blast! Thanks to everyone who came out! People came from all over. It was amazing and Wayne [original guitarist Wayne Lozinak, who recently rejoined the band] did great.

“This week we’ll be recording and rehearsing with HATEBREED and then it’s off to Mexico (HATEBREED plays Mexico City on March 14). Then, when we come back, we’ll be recording and rehearsing until we perform at the Golden Gods Awards in L.A. on April 7. We might squeeze in another secret/short notice show somewhere too so keep your eyes peeled. We will also be shooting a video for the SLAYER song [‘Ghosts of War’] we covered [for the upcoming covers album, ‘For The Lions’]! More news on that soon!”

“Uranium”, which is exclusively available on Fuse On Demand, sat down with members of HATEBREED to talk about the band’s first DVD, their upcoming book and their hardcore fan base. The full interview is available all March long only on Fuse on Demand.

Watch a clip below.

Fuse on Demand is available on Cablevision, Comcast, Cox, Direct TV, Insight, Knology, WAVE, Metrocast, Hometown, Midcontinent and a whole bunch of other places across the U.S.

HATEBREED will release its long-awaited new covers album, “For The Lions”, in Europe on May 11, 2009 via Century Media Records. Due in the U.S. on Tuesday, May 5 via E1 Music (formerly KOCH Records), tis new release is the follow-up to the band’s #1 Billboard-charting DVD “Live Dominance”, which came out last September.

The songs on “For The Lions” were carefully selected by HATEBREED to represent a panoramic view of some of their favorite artists and greatest musical inspirations. Having completed the album in 2008, the band felt their work wasn’t done yet and just returned to the studio with original guitar player Wayne Lozinak to record additional tracks for the album. The four new covers are among the most bludgeoning the band has yet to record. They are “Ghosts Of War” (SLAYER), “Supertouch/Shitfit” (BAD BRAINS), “Thirsty” (BLACK FLAG) and “Suicidal Maniac” (SUICIDAL TENDENCIES).

For a preview of “Suicidal Maniac”, visit www.myspace.com/hatebreed.

HATEBREED will play a special one-off show on May 1 at Toad’s Place in New Haven, Connecticut, performing songs from the forthcoming covers album and of course, longtime favorites.