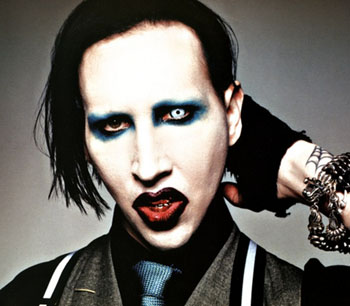 Marilyn Manson’s anticipated reunion with longtime friend and foil Twiggy Ramirez inches closer with the release of “We’re From America”, the first listen from the forthcoming “The High End of Low” album. Available as a free download March 27, exclusively on MarilynManson.com, the song will be available as a digital single on April 7 and will preview Manson’s forthcoming seventh studio album landing May 26.

The album’s official first single, “Arma… geddon”, will arrive at radio April 13. Manson’s new lineup, including Ramirez (for the first time in close to a decade), plus keyboardist Chris Vrenna, and drummer Ginger Fish, will close the main stage at the Rockstar Energy Drink Mayhem Festival, this July through August. Manson will also kick off his world tour with a headline festival run this June in Europe.

Produced by Manson, Vrenna and Twiggy, “The High End of Low” was recorded in Manson’s Hollywood Hills studio and also features the track “I Want to Kill You Like They Do In The Movies”. Manson says of the new album, “I think my life definitely ended and began. The record sounds very final, but it’s almost optimistic — though that feels like a strange word to use. It’s a phoenix from the fire and a redemption resurrection.”

In a recent interview with U.K.’s Kerrang! magazine, Marilyn Manson stated about “The High End of Low”, “This is not a record that we would leave black and self-titled and mature. This is the experienced record. This album is the 12th-grade guy that has VD and did cocaine in high school, who has been arrested once and the 9th-grade girl wants to fuck him.

“The songs on this record are quite autobiographical, but they’re also very much their own stories in the same sense as some of my earlier work on ‘Antichrist Superstar’. The songs are in the order in which they were written and sung. It was a story that took place and I didn’t really know what it was going to be ’till it happened. I had to find out how it was going to end in order to end the record. This album left many scars, and I think they are good ones.”

“I wrote all the lyrics on the wall of my room. It wasn’t to be decorative; it was one of those things, like it’s the last thing someone sees before they put them somewhere else. I think it looks good. And if anyone wants to come into this room and fornicate with me, I think they are a keeper… and when I say keeper, I mean kidnapping. I am probably going to do most of the press for the record from my house, before I leave or destroy it, because you can see the story and what the record as made from within the house.”

“During the whole process I took a lot of photos, so the artwork is a lot of storytelling and the way that the songs have turned out is more from my point of view rather than looking at me. Because I always wanted to take pictures, my house is set up like a movie set. Instead of lamps I have movie lights and smoke machines and things.”

“I really look at this record as a film, maybe because I sort of directed it. I stopped trying to conform regular life into the idea that it’s regular life. Why isn’t it all just a movie? If people are watching, they’re watching me being an asshole or being boring or creating something amazing. That’s just a part of the movie. It allowed me to be more creative.”

“’15’ is track 15 on the album. It’s the most important song I think that’s been written by MARILYN MANSON as an entity. It’s the most unusual song I have ever heard. I thought that the album was done, as there is a glorious epic track [before that] that I think will make Twiggy forever recognized as a guitar hero. That felt like the end of the record, but what was happening in my life had not resolved itself. So on January 5, one five, I sang ’15’ and the lyrics will tell the story of that day…”