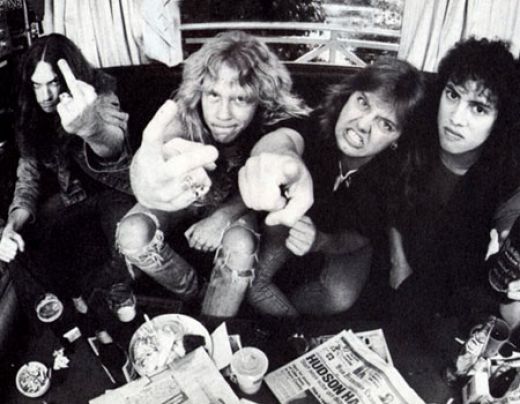 An audio interview with Kirk Hammett conducted by the Stockholm radio station Bandit Rock 106-3 when the band was in Sweden earlier this month is available for streaming at this location.

“It’s always good to be in Sweden,” Kirk says in the interview. “I know you guys think that we’re traumatized by the whole Cliff Burton thing [on September 27, 1986, METALLICA’s bassist Cliff Burton died in a tragic bus acccident in Sweden — Ed.], but that’s really not the case. We don’t hold Sweden responsible or any of that. But I feel that every time people say, ‘Welcome to Sweden,’ and I say, ‘It’s good to be back in Sweden,’ and people are like, ‘Wait a second. Didn’t you have a tragic event happen here?’ But, like I said, that could have happened anywhere, and we don’t really blame Sweden as a whole for that — it’s ridiculous to. . . We do talk about it on occasion. We were talking about Cliff Burton just a couple of days ago. We got on to the subject of the Rock and Roll Hall of Fame and we just started talking about how cool it would have been if Cliff was there to experience it.”

METALLICA has announced a new release date for its digital “box set” called “The Complete Metallica” that will feature the band’s entire 163-track recorded catalog. According to the group’s official web site, the package will now be available exclusively through iTunes beginning on April 14, before surfacing at all other digital outlets on April 28.

“The Complete Metallica” will be released during a high-profile period for the Los Angeles-based hard-rock heroes. On March 29, Activision will release the highly anticipated video game Guitar Hero: Metallica, featuring 28 songs from the band’s nearly 30-year career. In addition, METALLICA will be inducted into the Rock and Roll Hall of Fame and Museum, which honors legendary rock and roll performers, in a ceremony to take place in Cleveland on April 4.

METALLICA recently completed its first proper tour of the United States and Canada in four years in support of the platinum-selling “Death Magnetic”, which debuted at No. 1 in September 2008 and won two Grammy Awards for “Best Metal Performance” (for the track “My Apocalypse”) and “Best Recording Package.” They are currently on an extensive European tour.