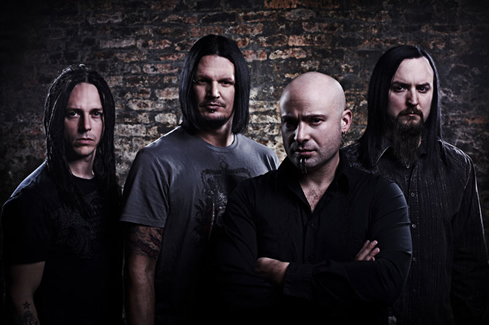 Sonic Excess conducted an interview with bassist John Moyer and drummer Mike Wengren of Chicago heavy rockers DISTURBED on March 25, 2009 in Denver, Colorado. Watch the chat in two parts at this location.

DISTURBED kicked off the fourth edition of the Music As A Weapon tour on March 21 in Waterloo, Iowa. The lineup this year also features KILLSWITCH ENGAGE, LACUNA COIL, and CHIMAIRA.

The start of the tour was pushed back from March 20, where it was scheduled to begin with an outdoor show in Madison, Wisconsin, due to cold weather. The Madison gig has been rescheduled to May 10. More details are up at Disturbed1.com.

Two weeks ago, DISTURBED announced that fans will be able to purchase a digital download of each date on the trek at bootlegs.disturbed1.com. The price will be $9.99 and each download will be available within three days after the show.

DISTURBED is touring behind its fourth album, 2008’s “Indestructible”, which has sold 958,000 copies since its release last June.