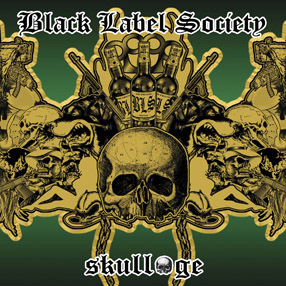 “Skullage”, BLACK LABEL SOCIETY’s new “greatest-hits” collection, sold 4,600 copies in the United States in its first week of release to debut at position No. 111 on The Billboard 200 chart.

“Skullage” was released on April 21 in three different configurations: CD, DVD and CD/DVD.

In a recent interview with Live-Metal.net, Zakk Wylde stated about “Skullage”, “The record company was just asking. They said, ‘Zakk, can you just put a whole compilation of stuff together before you put the new album out?’ When we did ‘Kings of Damnation’, there was a bunch of fuckin’ tunes on that thing. He goes, ‘Well, can you make another one?’ I go, ‘Yeah, I can put a bunch of shit together on that fuckin’ thing.’ He said, ‘Cool, we’ll just put that out to fuckin’ hold you over until the next record.’ I said, ‘Well, no fuckin’ problem.’

Regarding whether there is going to be any unreleased material on this new compilation, Zakk said, “Yeah. We did a whole bunch of fuckin’ acoustic shows and shit like that, me and Nick [Catanese, guitar], a while ago. They came out really fuckin’ cool. It was just me and Nick doing a batch of fuckin’ material and shit like that, acoustic versions of heavy songs. So yeah, we’re putting that shit on there, too.”