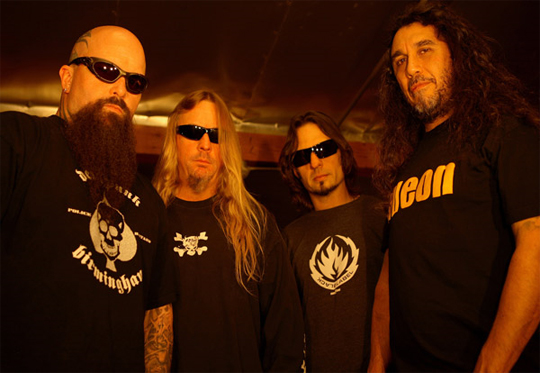 California thrashers SLAYER are putting the finishing touches on their new album with producer Greg Fidelman for a late summer release via American Recordings/Sony BMG. The forthcoming CD will include the song “Psychopathy Red”, which was made available as a limited-edition seven-inch vinyl disc on April 18, 2009 as part of the third annual Record Store Day.

Prior to the new album release, SLAYER will join forces with MEGADETH to perform together for the first time in more than 15 years when they co-headline four shows in Canada in late June. The tour, dubbed “Canadian Carnage”, will also feature MACHINE HEAD and SUICIDE SILENCE, and will see MEGADETH and SLAYER each closing two of the four shows. SLAYER will also co-headline with MARILYN MANSON on the five-week Rockstar Energy Mayhem Festival, set to kick off July 10 in Sacramento, California.

On Tuesday, May 19, BLABBERMOUTH.NET spoke to SLAYER guitarist Kerry King about the band’s new CD and their upcoming touring activities. Highlights of that conversation follow below.

On the status of the new album recording sessions:

Kerry: “Probably today was the last day for touch-ups. The longer you let that go on, you can keep fixing it forever; you’ve just gotta cut the line at one point and say, ‘We’re done.’ But I think Tom [Araya] finishes up vocals today, and then it’s just gotta get mixed.”

On whether producer Greg Fidelman is going to be mixing the album as well:

Kerry: “To my knowledge, I think he’s doing it. I don’t always pay attention to that. But I haven’t heard anything to the contrary, so I would imagine, yeah.”

On Greg Fidelman being a somewhat odd choice for a producer considering that a lot of fans seem to blame him for the distorted sound on METALLICA’s “Death Magnetic” album:

Kerry: “I would never do that because — no offense to him or METALLICA — but it’s not Greg’s fault for the last 15 years of METALLICA. I think he made a decent record with them. I think ‘Death Magnetic’ is pretty cool. I mean, It’s not the glory of the ’80s, but it’s better than ‘St. Anger’, you know what I mean?! You’re dealing with hard-headed dudes. We’re the same way. When you’re in the business for as long as us and them [METALLICA] are, you don’t always [listen to] everybody’s opinion; you’ve kind of got your own opinion. I blame everybody, not just him. [Laughs]”

On the songwriting/recording process for the new album:

Kerry: “We were over-ready [when we recorded 2006’s ‘Christ Illusion’]. My songs [for the new album] came together since the middle of January — that was super-fast. I [attended] the NAMM show in the middle of January [2009], the big trade show out here [in California]. I might have had some riffs [at that point], but I had no songs. So everything I’ve done [songwriting-wise] has been put together since then. And this time when we went into the studio, we were, like, under-ready, because there were songs that hadn’t even been finished, so we actually had to teach Dave [Lombardo; drums] some of them in the studio, which is totally unique for us. When you do it like that, you risk songs sounding the same and vocal ideas being similar, but I think everything sounds really different. . . [We did it that way because] we had a window of time that we secured Greg Fidelman [for and] we wanted to keep that happening, so after the NAMM show came around, I went, ‘Shit, I’d better get some fuckin’ songs happening.’ So I got off my ass and really worked at it.”

On how he would describe the new material:

Kerry: “I think ‘Christ Illusion’ and ‘God Hates Us All’ [2001] were compared to faster records like ‘Reign In Blood’ [1986]. I think this one, when it’s all said and done, will be compared to ‘Seasons In The Abyss’ [1990], because I think ‘Seasons’ was a little bit of everything, as far as SLAYER goes. I think this one has a little bit of everything — more so than anything we’ve done since ‘Seasons’. So I would imagine people are gonna compare it to that one.”

On how the songwriting is split between him and fellow guitarist Jeff Hanneman this time around:

Kerry: “I don’t know which songs… We’ve got 13 songs. I don’t even know if they’re all done, it’s been such a hectic recording thing, but musically I wrote six and he wrote seven. It’s about as down the middle as you can get.”

“I think, as a general description [I tend to write the faster stuff and Jeff comes up with the moodier material], but that’s not to say that Jeff won’t write fast and I won’t write slow, but generally I’m the fast, thrashier dude and Jeff’s definitely the more moodier guy, but trail off into each one’s domain every once in a while.”

“I think everything [Jeff’s] done came up at least since November. Because we did those first three songs [including ‘Psychopathy Red’] in October and those were all his. I don’t know if he’s worked just since January like I have. I would imagine he probably worked a little earlier than that.”

On why not all 13 songs that are being recorded will make it to the finished album:

Kerry: “I got out of that mindset that was popular in the ’90s when everybody put as much material on CDs as would fit. I just think that’s a waste of time, and I think it’s a waste of song ideas, because everybody I’ve ever heard do that, maybe two or three songs are good and the rest is just filler. All my favorite records from whan I was growing up had 10 songs tops, and they’re all kick-ass, so I just [think back to] how I perceived records as when I was a fan.”

On upcoming Canadian mini-tour with MEGADETH and MACHINE HEAD:

Kerry: “I think it’s good for the fans because anybody that’s been into this kind of music since the mid-’90s has never seen a tour like that. So, if it goes well, maybe a year or two down the line, we’ll do it all through Europe, we’ll do it all through America, but these first four [shows], they seem to be selling pretty awesome, and from a fan’s perspective, I think it’s cool. I think it’s even cooler that MACHINE HEAD is on it — I think that’s gonna be awesome. I’ve been trying to tour with them — again — for the last couple of years, so at least we’ll get a few shows under our belt.”

On whether he would ever consider playing an entire album again from beginning to end the way SLAYER started doing with “Reign In Blood” a few years ago:

On whether he considers recording and putting out albums to be less important for SLAYER as a band because of the state of the record industry and whether releasing new CDs is nothing more than an excuse to go out on the road:

Kerry: “We don’t really need an excuse. I think we’re a band that’s been around long enough to where when we come around, people will come out to see us, but I think new music definitely helps because there’s something new to go see as part of your show. Every time you put one out, the industry’s so different — you don’t know how you’re gonna market it, you don’t know if it’s gonna be a record that’s [just] available online, but metal fans seem to like to have the disc and the artwork and all that other shit, so in my line of work, I think it’s still important to have new music [available to promote].”

On whether he’s conteplating retiring from SLAYER at some point in the not-too-distant future once he has reached a certain age:

Kerry: “I’m not, but I’m only one of four people, so… I don’t know what’s in everybody else’s head. I’m into it. I’m thinking about — while we’re on this hot writing spree — making up stuff for the next record and just leaving it sit until the time comes when we need it. I’m looking forward to the next record. I’m already thinking about stuff we can put on there.”