Legendary vocalist Ronnie James Dio has revealed to Classic Rock that DIO will play a new song on the upcoming European tour, which kicks off next month.

“It’s called ‘Electra’, which will be released as a limited-edition single, although I’m not sure as yet just how we intend to put it out,” he said.

“However, it was important to me that DIO didn’t just come over on the back of the old material, but that we had something fresh to offer.:

The band — also featuring guitarist Doug Aldrich, bassist Rudy Sarzo, drummer Simon Wright and keyboard player Scott Warren — will perform mostly material from its own catalog this time around, with nothing at all included from Dio’s time with BLACK SABBATH.

“We’ll probably do a coupe of things from RAINBOW, but there’s no point in doing anything by SABBATH. I’ve been doing that with HEAVEN & HELL. There are a lot of people out there who are fans of DIO the band, rather than of me as the former singer with RAINBOW and BLACK SABBATH, and for them we’ll do some material we’ve not done for a long time from the DIO era.” 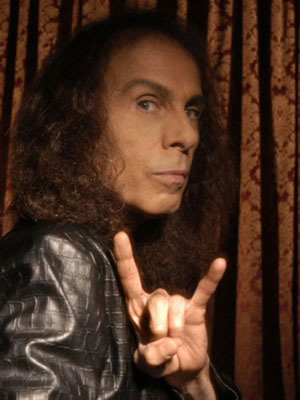 According to the singer, DIO is planning on recording two new albums next year. “I want to finish the story started with the ‘Magica’ album [released in 2000],” he said. “There are two parts left, and we’ll do those together. At moment, though, I’m not sure when we’ll be recording. Part of the reason for this is that there’s more happening with HEAVEN & HELL.”

HEAVEN & HELL — which features Dio alongside BLACK SABBATH members Tony Iommi, Geezer Butler and drummer Vinny Appice — has been on a break while Iommi receives stem cell treatment for cartilage repair on his hand. However, the band is planning on hitting the road again in early 2010, according to Dio. “I’ve heard we’ll be over [in the U.K.] in February, and knowing the way things work with this band, we’ll probably do a lot more touring on the back of that,” Dio said. “Not that I’m complaining. Working with these guys again has just been so much fun, and very rewarding. There are no egos getting in the way now. We’ve all grown up a lot.”

DIO’s “Killing The Dragon” album from 2002 was released in June on limited-edition vinyl with a gatefold pop-up cover via Night Of The Vinyl Dead. Only 500 hand-numbered copies were manufactured.

“Killing The Dragon” was originally released by Spitfire Records.

DIO’s “The Very Beast of Dio” was officially certified gold by the Recording Industry Association of America (RIAA) on March 11, 2009 for shipments in the United States in excess of 500,000 copies.

Issued in October 2000, “The Very Beast of Dio” is the second greatest-hits collection CD — and the first to be released in the U.S. — from the Ronnie James Dio-fronted band.

DIO’s last release was the “Holy Diver Live” CD, featuring a performance of the classic “Holy Diver” album in its entirety, from start to finish, recorded live for the very first time in 2005 in front of a sold-out London crowd. It also includes, among others, “Heaven & Hell”, “Sign of the Southern Cross” and “Mob Rules” from vocalist Ronnie James Dio’s BLACK SABBATH days, “Tarot Woman”, “Man on the Silver Mountain” and “Long Live Rock ‘N’ Roll” from the RAINBOW era and “We Rock” from his solo career.