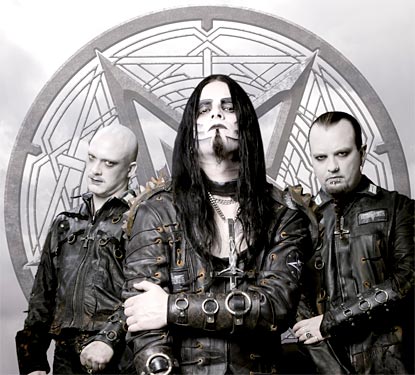 “Born Treacherous”, a brand new song from Norwegian symphonic black metallers DIMMU BORGIR, is available for streaming on the band’s MySpace page. The track comes off the band’s ninth album, “Abrahadabra”, which will be released in Germany on September 24, in the rest of Europe on September 27, and in North America on October 12 via Nuclear Blast Records.

The word “abrahadabra” (which roughly translates into “I will create as I speak”) first publicly appeared in Chapter III of “Liber AL vel Legis” (commonly referred to as “The Book of the Law”) written by Aleister Crowley in Cairo, Egypt in 1904.

In a recent interview with the German edition of Metal Hammer magazine, DIMMU BORGIR vocalist Shagrath (real name: Stian Tomt Thoresen) was asked why the band chose to break the tradition of using a three-word title for a DIMMU BORGIR album on its latest effort. “It was a tradition for the last records to use a three-word title, basically, for the fact that it represents much more of a unity thing than just one word,” he replied. “‘Abrahadabra’ is more about the transfusion of new blood, I would say, in a way that we have chosen to do a lot of things differently from what we had done before. We wanted to break out of the patterns in many ways, including the people who play on the record, and also the studios we have used for the record — everything is basically different, so therefore we felt it was more right to use a one-word title instead of a [three-word one].”

When asked why DIMMU BORGIR chose to hire almost 100 guest musicians to replace two former members — bassist/clean vocalist ICS Vortex (real name: Simen Hestnæs) and keyboardist Mustis (real name: Øyvind Mustaparta) — Shagrath said, “Well, you can’t see it like that; it’s a stupid way of saying it. I wouldn’t phrase the question like that. It doesn’t make sense, really, because the orchestration has nothing to do with the firing of the two members at all. That’s just a stupid question. We have used an orchestra before, but this time we’re going for a bigger orchestra to make it more epic and sound bigger, and that’s the way we want to go and that has, basically, nothing to do with any previous members leaving or being fired.”

Regarding how DIMMU BORGIR plans to reproduce the new album live, Shagrath said, “It’s not gonna be easy to bring 100 people on tour to do a show like that every night — that’s basically impossible — so we’ll probably use backing tracks for a lot of stuff live but also play some of the stuff on keyboards. We are planning, though, a one-off show — we’ll see how it goes, but it’s still in planning phase — to do a live performance with a full orchestra and a full choir, and it will probably happen sometime next year in Norway, if everything goes as planned.”