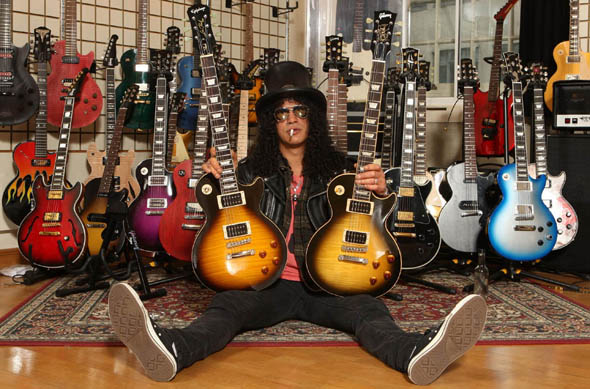 According to Slash’s European record label, Roadrunner Records, the “Beautiful Dangerous” video was “leaked” prematurely and is in the process of being taken down. The clip’s official U.S. premiere is scheduled for tomorrow (Thursday, October 28) via VEVO.

“Beautiful Dangerous”, the new “sexually charged” video from legendary guitarist Slash (VELVET REVOLVER, GUNS N’ ROSES), can be viewed below (courtesy of Australia’s long-running rock station Triple M). In the clip, which was filmed on August 27 with guest singer Fergie (a.k.a. Stacy Ann Ferguson), Fergie plays an obsessed fan who will do anything to get her man, stalking the famous guitarist around the seedy bars of Los Angeles. Slash said in a Twitter posting, “[The] concept is twisted; Fergie’s idea.”

As previously reported, Slash will do “guest guitarist spots” on CBS-TV’s “Late Show With David Letterman” and NBC-TV’s “Late Night With Jimmy Fallon” on October 28 and October 29, respectively.

The deluxe edition of Slash’s self-titled solo album was released on September 28. The three-disc set includes two CDs and a 52-minute DVD featuring behind-the-scenes footage from the making of the album, performance footage from Australia and Los Angeles, video clips and more.

“Slash” scored the highest new entry on The Billboard 200 chart in early April, with first-week U.S. sales of around 60,000 copies.