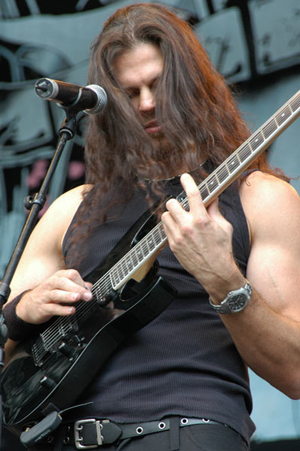 Tomek Moczerniuk of Papa Tomski Blog conducted an interview with MEGADETH guitarist Chris Broderick on Friday, June 24. A couple of excerpts from the chat follow below.

Papa Tomski Blog: Dave Mustaine once said that when he partnered up with you, it reminded him of when “Ozzy Osbourne met Randy Rhoads.” He also called you “the best MEGADETH guitarist ever.” Do you agree?

Broderick: I don’t know, that’s a big statement. I’m very glad and grateful that Dave thinks about me that way. It’s very humbling, but trying to assess who’s the best is like apples and oranges. It’s all about personal preferences.

Papa Tomski Blog: On February 8, 2010, [bassist] David Ellefson rejoined the band, replacing James Lomenzo, How is it to have him back?

Broderick: It’s awesome! There is this great camaraderie between him and Mustaine. To see them interact with each other is just amazing. It’s also a great privilege to play with such a big metal icon. He really is a great player and a good guy. We have a good time together on and off the stage.

Papa Tomski Blog: Your best and worst memory with MEGADETH.

Broderick: Let’s start with the best. I would have to say that it was that [“Big Four”] show in Sofia, Bulgaria. The crowd there was great, plus they had all those cameras, lights. The energy was very intense and the experience was truly exhilarating. Also in Warsaw, Poland we played in front of the biggest crowd you can dream of. Both of these shows were just insane.

Papa Tomski Blog: And the worst one?

Broderick: Tough to say, but last year I had that falling-on-stage spree: within a month I must’ve fallen at least 5-6 times during the show. I remember that one time in Oregon I tried to step over that lightning rig to get as close to the fans as possible, when I caught it with my heel, slipped and fell backwards. Landed on my head and it was damn painful. But I had to regain composure and keep on playing. I am sure it looked funny, but my head and neck hurt as hell.

Papa Tomski Blog: It’s been almost two years since you came out with your 12th album, “Endgame”. Rumor has it that you’re working on a new one. What is it going to be like? Will it be the best ever for MEGADETH?

Broderick: It’s true that we’ve been working on No. 13. Writing is almost all done, we are actually getting really close to finishing it. Will it be the best ever? I think so. The thing about the composing is that when you are working on it you are part of it. You almost have to “become” music that you create. You also have to believe in what you write and that it will be the best ever. Your music also matures with you over time, so I believe that each new album becomes the best one. And I am not being biased here.

Papa Tomski Blog: Your band was always known for problems with drugs/alcohol, but you — on the other hand — have always taken good care of yourself. Do you still party hard or have you convinced the other guys to join the gym?

Broderick: (laughter) No, we don’t party anymore. When we are on the tour we will go to a social event or hang out with other bands, but it’s not like cracking the bottle open and tilt it down till it’s empty. We are not youngsters anymore, so we know, that if we want to give our best night in and night out we need to take care of ourselves. We know that once we get off the stage we need to recover for the next show. And we all do it according to our own needs. I see my guys in the gym every once in a while, but everyone has their own regiment.

Read the entire interview on the Papa Tomski Blog.

Photo below by Stephanie Cabral