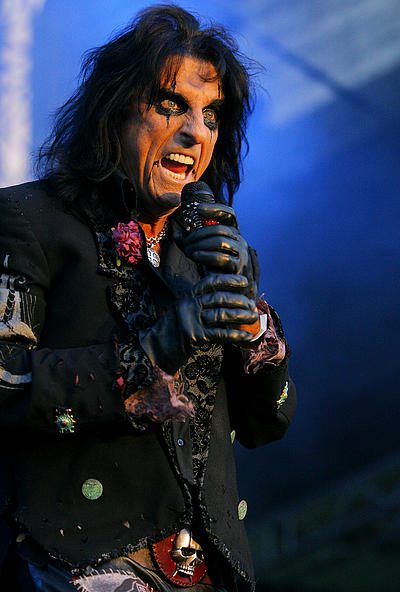 Legendary rocker Alice Cooper has launched a new audio blog, “Me, Alice”, at the web site of his radio show, “Nights With Alice Cooper”. Check it out using the SoundCloud player below.

In a recent interview with the U.K.’s Independent, Cooper insisted that he and his band are “doing better tours now than we ever did.” He added, “When I was 30, I was a mess. I was drinking a bottle of whisky a day. I did shows that weren’t anywhere near as good as the shows I do now.”

Cooper, who calls himself a born-again Christian, also said that he believed the Bible was the literal word of God. “Yes, true each word,” he said. “[God] has a plan for everybody. I look at my life and I think, ‘How is it possible that I didn’t die?'”

The rocker also spoke about his live performance, saying, “I treat Alice in the third person, because I can’t take him anywhere. He belongs on stage. But there was a gray area for quite a long time when I didn’t know where I began and where Alice ended.”

He continued, “If you take the image away. I’m still in a bar band, because I’ve never grown out of it. I’ll be the last guy who ever looks at the band and says, ‘Turn it down’. But I love the character. I always say Alice Cooper’s my favorite rock star. [My fans] don’t want him to be human. They want him to be this otherworldly character.”