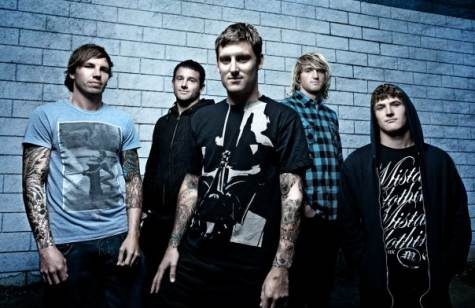 “Old Ghosts / New Regrets”, a brand new song from Australian metallers PARKWAY DRIVE, can be streamed in the YouTube clip below. The track comes off the band’s fourth album, “Atlas”, which will be released on October 30 via Epitaph Records. The deluxe package will include the “Home Is For The Heartless” DVD, a unique travelogue that follows the band’s adventures touring to many obscure destinations including Colombia, China and India.

Yet another creative leap forward for the chart-topping Australian band, “Atlas” boasts some of the most up front and confrontational material PARKWAY DRIVE has ever released, while at the same time taking several unexpected turns into lush sonic terrain, redefining their trademark sound while reinforcing their position as leaders in their field.

Recorded in Los Angeles with esteemed producer Matt Hyde (SLAYER, HATEBREED), “Atlas” sets the standard in musical progression by pushing musical boundaries and drawing from a wider scope of influence. From heavy, technically advanced riffs and rapid fire blast beats, to haunting death growls combined with fervent vocals and symphonic melodies, “Atlas”‘ ferocious mix of metal and hardcore reaches new horizons with songs such as “Dark Days”, “Old Ghost / New Regrets” and “The River”, all of which will have fans careening straight for the circle pit.

The new record is positioned to be the most highly anticipated heavy album of the year and follows 2010’s phenomenally successful “Deep Blue”, which debuted aat No. 39 in the U.S. on The Billboard 200, No. 2 in Australia, as well as reaching solid gold and winning the ARIA Award for “Best Hard Rock/Metal Album” and has since built steadfast momentum as a result of a groundswell of fan support in the U.S. Building on a record that was regarded as “not just a landmark album for themselves, [but] a milestone album for modern metal” (Metal Hammer),” “Atlas” cements PARKWAY DRIVE as the world’s most hardcore musical superpower.

“‘Atlas’ is a culmination of ten years,” says McCall. “Ten years of PARKWAY DRIVE, ten years of travel, ten years of being alive and watching our world spiral out of control. We’re not holding anything back, we’re not pulling any punches, and this world deserves nothing less.”

“The Home Is For The Heartless” DVD has already reached platinum status in Australia and is only available in the U.S. via the deluxe package. According to McCall, the DVD gives an additional insight into the album’s lyrical themes, which are closely related to exploration and discovery.

“Reading the lyrics to ‘Atlas’ after watching the DVD, I think you will have more of a sense of where we are coming from,” McCall reveals. “The album is called ‘Atlas’ because it’s a combination of the travelling we’ve done over the past year, while also playing on the idea of ‘Atlas’, who carried the weight of the world on his shoulders.”

When asked if he feels as though he and the band are anything like the mythological Greek titan, bearing the weight of the world on their shoulders, McCall replies: “I think everybody feels that way at one time or another. It’s a heavy place to live, and it’s a heavy time to be alive. Some people watch the DVD and go, ‘Man, it makes me jealous of your life.’ But I think with every expanse of your horizon, you go into another bubble of society where you are able to see that others in the world aren’t doing so good. It’s one of those things… the more your horizon expands, the more negative things you see. For that reason, there is a lot of stuff on this record that is more confrontational than anything we’ve written in the past.”

The track listing for the deluxe CD/DVD edition of “Atlas” is as follows: