SLAYER Guitarist: ‘I Never Assumed We’d Be Around 30 Years’ 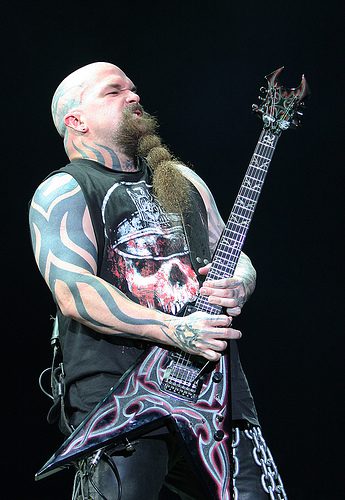 The Indian edition of Rolling Stone magazine recently conducted an interview with SLAYER guitarist Kerry King. A couple of excerpts from the chat follow below.

Rolling Stone India: The last few years have been pretty exciting, especially the “Big Four” tour starting with Sonisphere. I remember [SLAYER drummer] Dave [Lombardo] telling me in 2010 that the last time SLAYER played with METALLICA was way back in the early Eighties in Orange County when both [Dave] Mustaine and [Ron] McGovney were in that band. So, Kerry, how was the experience of that “Big Four” tour?

Kerry: You know, it’s funny. About METALLICA, the funny thing about the two bands is that we never really talk. Not because we are at odds with each other. Simply because we were in completely different circles. When we were touring, they were home. When they were touring, we were home. So aside from a couple of shows early on in Orange County like you said, we played maybe five shows in 25 years at random festivals. So it was really cool making that connection. I thought going into that, the whole “Big Four” idea was to get these bands together. What I was left with was a great opportunity and a great memory of my own.

Rolling Stone India: 2013 is going to be the 30th anniversary of [debut album] “Show No Mercy”. Do you ever sit down, look back and say, “Wow, we’ve been around for three decades”?

Kerry: Absolutely! In the beginning, I never assumed we’d be around 30 years. We got lucky. Our first record went out when me and [guitarist and founding member] Jeff [Hanneman] were 19, Dave was 18, I think [bassist and vocalist] Tom [Araya] was 22. So we were lucky enough to get an early start. And at that time, we got into music to get beer and chicks. And luckily, somebody found us and we got to make a career of it. I think for a lot of bands, their first record is their shot at getting famous. Their second record — they gotta repeat that.