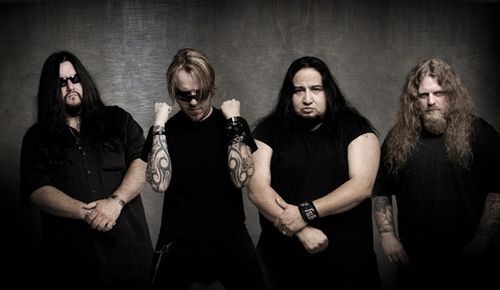 Los Angeles cyber metallers FEAR FACTORY have released a video (see below) for the title track of their new album, “The Industrialist“. The clip, which contains footage from this past June’s Graspop Metal Meeting in Dessel, Belgium, was helmed by James Zahn, the man responsible for creating the “The Industrialist” album trailer.

Released in North America on June 5 via Candlelight Records, “The Industrialist” is a conceptual record based around a story written by Burton C. Bell. Lyrics to the album’s ten songs divulge the narrative as discussed recently by Bell with Decibel magazine. The album’s artwork was created by American designer Anthony Clarkson with additional direction from the band. The album was made available on three formats — standard CD, a limited edition deluxe digi-book (featuring two additional songs), and 180-gram double vinyl.