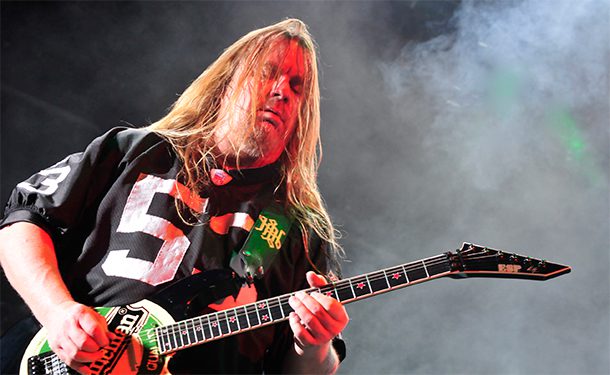 Devastating news has just been announced through SLAYER‘s official facebook page just a few minutes ago. Jeff Hanneman  passed away earlier today (02/05/2013) near his Southern California home at the age of 49.

Jeff Hanneman has been sitting out of SLAYER since January 2011 when he contracted necrotizing fasciitis, likely caused by a spider bite, and has been undergoing surgeries, skin grafts and intense rehab.

Read the announcement below:

“Slayer is devastated to inform that their bandmate and brother, Jeff Hanneman, passed away at about 11AM this morning near his Southern California home. Hanneman was in an area hospital when he suffered liver failure. He is survived by his wife Kathy, his sister Kathy and his brothers Michael and Larry, and will be sorely missed.