Kansas-based Westboro Baptist Church has tweeted about the passing of Jeff Hanneman, claiming that the SLAYER guitarist was just the latest in a line of musicians who were killed by “God.”

“Which of your idols will God kill next? Yesterday Chris Kelly #kriskross. Today Jeff Hanneman #Slayer.” Westboro Baptist Church wrote Thursday afternoon (May 2). It was followed by the hashtag #picketfunerals and accompanied by the picture below.

The Westboro Baptist Church is described by the Wall Street Journalas a “tiny Kansas church… [that] … preaches that U.S. deaths in Afghanistan and Iraq are punishment for American’s tolerance of homosexuality and abortion.” As Examiner.com noted of the church, “their flamboyant demonstrations at the funerals of non-gay service members, using the events to highlight their belief that military deaths overseas are justified punishment for U-S tolerance of homosexuality. (‘You’re Going to Hell,’ ‘Thank God for Dead Soldiers,’ and ‘God Hates You’ are popular Westboro slogans.).”

In a June 2010 appearance on the nationally syndicated radio show“Rockline”, BLACK SABBATH singer Ozzy Osbourne blasted theWestboro Baptist Church‘s protest of Ronnie James Dio‘s funeral. “I thought it was in such bad taste that those people had those banners about Ronnie James Dio. That’s disgusting. They say that we’re the anti-christ. Well, what makes them any better?”

Jeff Hanneman died at about 11 a.m. yesterday (Thursday, May 2) near his Southern California home. He was 49. Hanneman was in an area hospital when he suffered liver failure. He is survived by his wife Kathy, his sister Kathy and his brothers Michael and Larry. 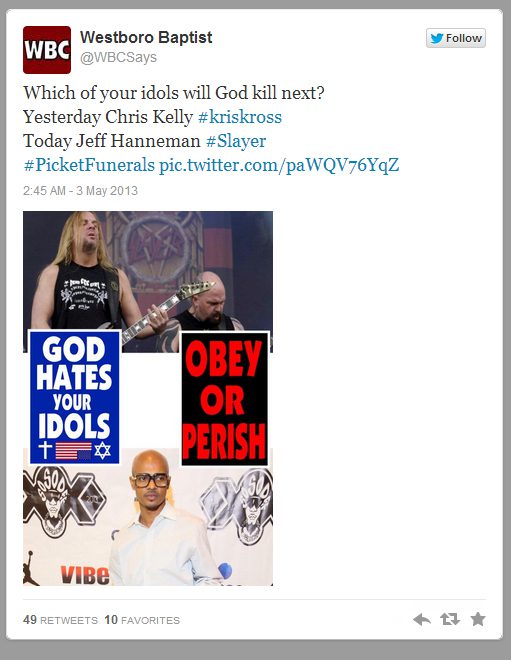 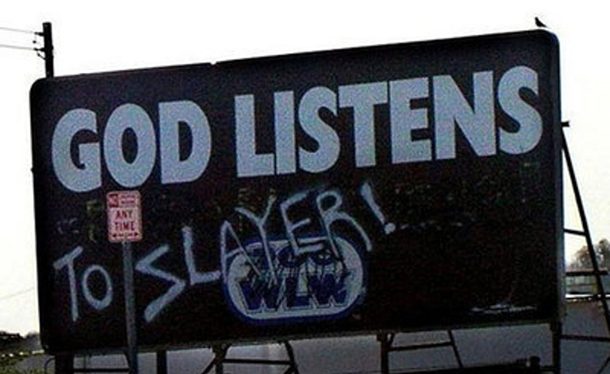