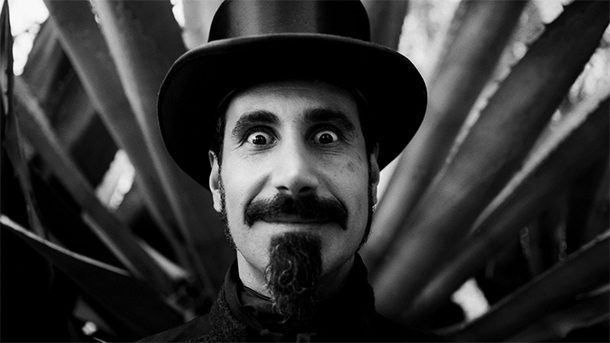 “Orca”, Tankian‘s first true symphony, will be made available on June 25 and the collaborative jazz-infused album “Jazz-iz Christ” will arrive on July 23.

Recorded in Linz, Austria in October of 2012, “Orca” was composed and demoed in Tankian‘s home studio and fully realized after a successfulKickstarter campaign that helped fund a recording and debut performance at the regal Brucknerhaus with the Das Karussell Ensemble. With conductor Werner Steinmetz at the helm, the four acts of “Orca” mix influences from early 20th-century composers with modern film compositional dynamics showing influences ranging from Ennio Morriconeto Philip Glass. Listeners are met with a mingling of sounds and intertwining pieces that are both serene and bombastic at the same time, offering a fresh interpretation to the classical art.

According to Tankian, “Orca is known as the killer whale, but is really a dark dolphin, a symbolism for human dichotomy.”

“Jazz-iz Christ” is Serj‘s brainchild, but truly is a collaborative effort between many musicians that Tankian curated to be part of the group and self-titled album. Among others, there are considerable contributions from renowned pianist Tigran Hamasyan, flautist Valeri Tolstov, and trumpet player Tom Duprey. Additional performances from Stewart Copeland and actor/musician Davis Alpay and Vincent Pedulla make for a very unique collaboration. The 15 tracks that comprise “Jazz-iz Christ”, a mostly instrumental effort except for four songs, are an amalgam of progressive jazz, electronic, ethnic and even rock elements, displaying a unique presentation of the genre itself.

Both albums will be available worldwide on iTunes, Amazon and other popular digital distributors and will be available for sale in various limited deluxe physical formats through Tankian‘s official website and the web site for Serjical Strike Records. Pre-orders for the deluxe limited editions of “Orca”, which includes a 180 gram picture disc, merchandise, and a signed version of the actual score, will begin on May 1, while pre-orders for “Jazz-iz Christ” will commence on May 15. Audio samples from both releases are available for preview on Serj‘s official web site.

Upon completion of SYSTEM OF A DOWN‘s summer touring in August,Tankian will hang back in Europe until the commencement of his own solo orchestral tour dates that begin on September 19 in Kiev, Ukraine. The concert program will include all four acts of “Orca”, but will also incorporate performances of many songs from “Elect The Dead Symphony”, which achieved critical and commercial success upon its initial release and tour in 2010.