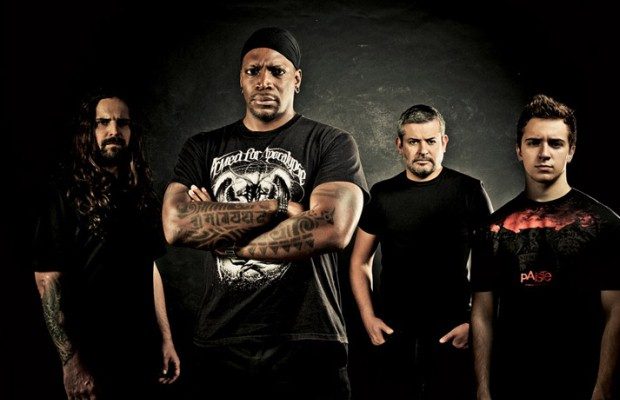 The long-awaited documentary about SEPULTURA’s incredible journey from Brazil to the world is coming to life with help of Kickstarter. Filmmaker Otavio Juliano has been following the band for the better part of 2010-2013, a time of tension and triumph for SEPULTURA, as they toured and recorded their album “Kairos”. Nothing has been off limits. This amazing story will go through SEPULTURA‘s history, myths, conflicts, personnel changes and struggles with the Internet economy in the early 2000s as well interviews and rare footage. This documentary is certain to bring fans closer to the band they love.

A new video update on the documentary, featuring interview clips with Philip Anselmo (DOWN, PANTERA) and Scott Ian (ANTHRAX), can be seen below.

According to the documentary makers, “About 50% of the film has been shot so far. We have witnessed this historic band experiencing wrenching transformations and unprecedented growth. We opened SEPULTURA‘s vault and dig into the best rare and unseen footage of the last 30 years. We will see them at their most vulnerable and human, and also as idols of the heavy metal genre. Those elements make the overall film an uncommonly powerful statement.”

SEPULTURA will reunite with producer Ross Robinson (KORN, LIMP BIZKIT, SLIPKNOT) to record their next album, tentatively due before the end of the year via Nuclear Blast Records. The CD will be tracked in June at Robinson‘s studio in Venice, California and will be co-produced bySteve Evetts, who previously worked with SEPULTURA on the “Nation”(2001), “Revolusongs” (2002) and “Roorback” (2003) albums, in addition to having collaborated with Ross on a number of other projects in the past.

SEPULTURA‘s upcoming CD will mark the first time the band will have recorded an album outside Brazil since “Against”.

“Roots” sold more than 2 million copies worldwide and was certified gold in the United States by the Recording Industry Association Of America(RIAA) for sales in excess of 500,000 units.

SEPULTURA has spent most of the past two years on tour in support of its 12th studio album, and Nuclear Blast Records debut, “Kairos”, which hit stores in July 2011.