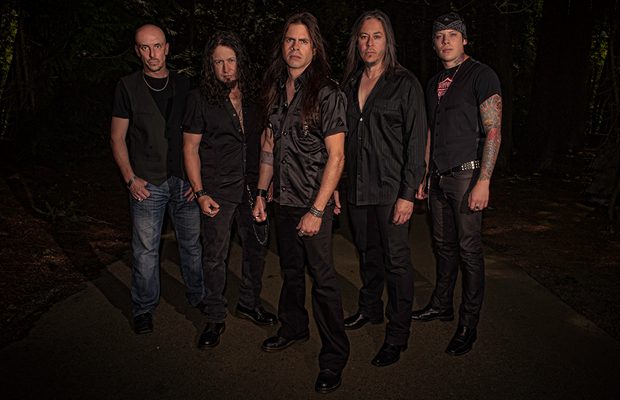 The Todd La Torre-fronted version of QUEENSRŸCHE played a brand new song, “Fallout”, for the first time last night (Saturday, May 18) at the Rock Hard Festival at Amphitheater in Gelsenkirchen, Germany. Fan-filmed video footage of the performance can be seen below.

The Todd La Torre-fronted version of QUEENSRŸCHE will release its new album, simply titled “Queensrÿche”, on June 25 via Century Media Records. The cover artwork was created by Craig Howell, who has previously worked on designs for “Star Wars”, SLIPKNOT and “American Idol”, to name a few.

“Queensrÿche” marks the debut release from the lineup comprised of La Torre (vocals; ex-CRIMSON GLORY), Michael Wilton (guitar), Parker Lundgren (guitar), Eddie Jackson (bass) and Scott Rockenfield(drums). The drums for the album were recorded at London Bridge Studios in Seattle, Washington with producer James “Jimbo” Barton — the man who engineered and mixed the band’s classic 1988 LP,“Operation: Mindcrime”, and its 1990 follow-up, “Empire”, and co-produced 1994’s “Promised Land”. The rest of the music and vocals were laid down at several different facilities on the West Coast.

Several versions of “Queensrÿche” are now available for pre-order:

*** 2-CD Media Book (For Europe only)
Standard CD, plus 2nd CD with the following bonus tracks, all recorded live in Snoqualmie, WA on October 27, 2012:

*** LP Version
One LP with the standard cd inserted into the sleeve as a bonus.

Fans were treated to a taste of the new album when the band released“Redemption” and it has been garnering praise ever since. The song has been listened to over 185,000 times on YouTube since it was unveiled in March.

Asked which album in QUEENSRŸCHE‘s catalog would most closely compare to what the band is doing now, drummer Scott Rockenfield told“Noize In The Attic”: “Our big goal was, once we kind of made our transition last year and moved on as a band, and Todd being in the band, and our focus of the live shows and everything, it’s always kind of been about looking at what really made QUEENSRŸCHE special. And for the live show, it’s the old stuff. And we’ve been focusing a lot, in the show, doing that, for the last year, and we’re continue to focus on doing that. On the record, I think the vein of what the record is a combination of all that great old stuff that we’re kind of known best for. I mean, for me, I kind of summarize it by saying, to me, it’s everything from the [debut] EP up to‘Empire’, or maybe even ‘Promised Land’ at that point, which is, to me, the most defining catalog that we’ve ever done. And I think for this record, it’s visiting that and taking that into the future.”

Added guitarist Michael Wilton: “I also think that when you hear this record, each song is gonna be unique in its own. For people that have heard the single that’s on YouTube called ‘Redemption’. Everybody’s asking, ‘Is the album gonna sound just like that?’ And I can say, ‘No.’ What’s great about this record is that every individual here was in the creative process and the writing — there was no outside writers, like [there were] on the last few albums. And it really shows, and it’s a real great blend of everybody’s strength and their creative elements, and the songs are definitely reflective of the personalities of this band right now.”

Continued Scott: “I think that’s important. Especially what Michael was saying. I think the focus of that earlier stuff, there was a massive chemistry between all of us that really worked, and we wanted to find that chemistry again, ’cause we’ve, unfortunately, had to struggle with that the last few years. But we always knew that that’s what we wanted to do, so now that we’re able to do that, finding that chemistry and that energy that got us to make those records is what that energy now is in this record. And Michael‘s right: the songs, there’s a great variety of things in it, but they’re all QUEENSRŸCHE, they’re all us doing it, it’s our chemistry of working together.”