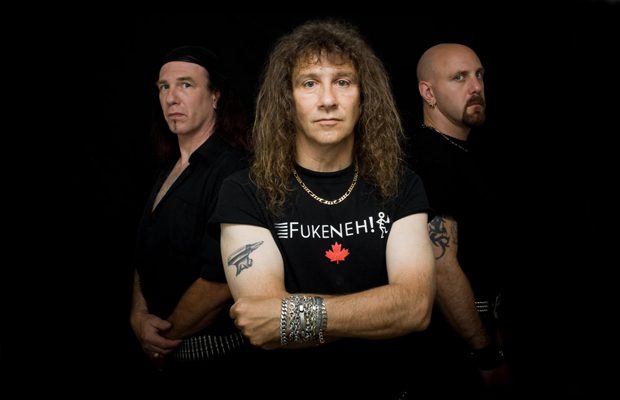 “Hope In Hell”, the new album from Canadian metal legends ANVIL, can be streamed in its entirety using the SoundCloud widget below. Due on May 27 in Europe and May 24 in Germany on SPV/Steamhammer, the follow-up to 2011’s “Juggernaut Of Justice” will be available in four different formats: as a limited-edition digipak including two bonus tracks, as a jewel case CD, double gatefold colored vinyl LP and as a digital download. These are the first cuts featuring ANVIL‘s new bassist Sal Italiano, who joined the band a year ago.

“Hope In Hell” was written and recorded following an 18-month world tour which took ANVIL around the globe. “We hadn’t expected this kind of extensive tour when we brought out ‘Juggernaut Of Justice’,” Kudlowconfesses. “Time just flew by. I could hardly believe it when I found myself in the studio again after the tour, ready to work on the next album. The reactions to ‘Juggernaut Of Justice’ and the shows had been so positive that we had plenty of ideas and inspiration for new material.”

Kudlow is referring to typical ANVIL tracks such as “Hope In Hell”, which the ANVIL guitarist considers a logical continuation of legendary numbers like “Forged In Fire”, “Metal On Metal” and “Plenty Of Power”. He also mentions “Eat Your Words”, according to Kudlow a “hybrid between ‘Jackhammer’ and ‘666’, in other words pure ANVIL, like in our early days.” Pretty much the same applies to haunting new tracks like “The Fight Is Never Won” and “Call Of Duty”, which presentANVIL true to form. But there are also a number of real surprises on“Hope In Hell”: “A song like ‘Badass Rock’n’Roll’ with its rock’n’roll groove surprised even me,” Kudlow admits. “It shows our great respect for bands like AC/DC and MOTÖRHEAD. I’m sure that all ANVIL fans will love this song because it’s the best we’ve done in this direction.”“Mankind Machine” sees Kudlow & Co. break new ground: never before has this band sounded so mechanical (like the title suggests). And never before has it sounded as oriented to the classic rock feel of the seventies as in “Time Shows No Mercy”.

So ANVIL are proud to present the kind of album that ANVIL fans will love: no concessions to short-lived trends, no modern frills but traditional metal with lots of classic rock music elements.

“What we do is totally timeless,” says ANVIL‘s frontman. “We’ve never tried to change our sound or experiment with trends and fashions. We live in our own world and have maintained our individuality and own identity.”

“The album’s flair reminds me of the beginnings of classic heavy metal in the most positive sense of the term,” says Kudlow. “I grew up in the Seventies, and I still like what I listened to back then.

“You can always rely on ANVIL. We don’t write our music for the radio and we don’t want to break any records. Some media criticize our uncompromising attitude, but we’re proud of never having betrayed our ideals and having remained faithful to our roots.

“We’re really proud and already love the new album just as much as our early releases from the beginning of the Eighties, because ‘Hope In Hell’sounds like ANVIL live on stage: natural, honest, unvarnished, never over-produced and straight from the heart.”