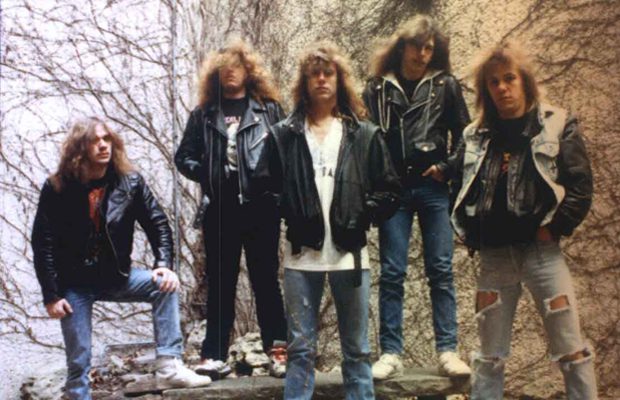 Reactivated cult classic prog-thrashers TOXIK have released a snippet of their first recorded song in twenty-four years. The fifty-second clip, which is available for streaming using the SoundCloud widget below, is a rough pre-mix demo — without vocals — of “Crooked Crosses” off the as-yet-untitled follow-up to 1989’s “Think This”.

TOXIK‘s founding member and lead guitarist Josh Christian comments on the new music: “I know it’s been a long time, and one of the things I always think about is my own reaction when I hear about older bands recording. It’s, like, ‘Oh, no… not again,’ because, let’s be honest, it’s usually an underwhelming listen and a lot of times it kills the band’s legacy for the fans. But I have a feeling that people are going to be surprised by the intensity and power of our new material. The songwriting demos, which are really just me arranging the parts and programming drums, have been getting rave reviews from random listeners in the band’s circle… It’s so inspiring for us. We haven’t spun off into nu-metal and we aren’t trying to rewrite ‘World Circus’. It’s definitely TOXIK, but it isn’t your dad’s version.”

TOXIK left the Hudson Valley region and toured the United States and the world, playing shows with the likes of PANTERA, SEPULTURA, EXODUS,KING DIAMOND and others in their quest for metal ascendancy before their premature implosion in 1992.

TOXIK released a DVD, “Think Again”, in August 2010. The set contained both vintage and brand new never-before-seen footage. The main feature was a 1989 headlining set from the Paramount Theater in TOXIK‘s hometown of Peekskill, New York. This performance came shortly after the release of “World Circus” and the energy level of the band wa truly at its peak for TOXIK‘s first headlining show. The DVD contains all the tracks from “World Circus” and an early version of “Spontaneous” that later appeared on “Think This”.