GEOFF TATE: ‘I Would Definitely Advise People To Put The Camera Down And Watch The Show’ 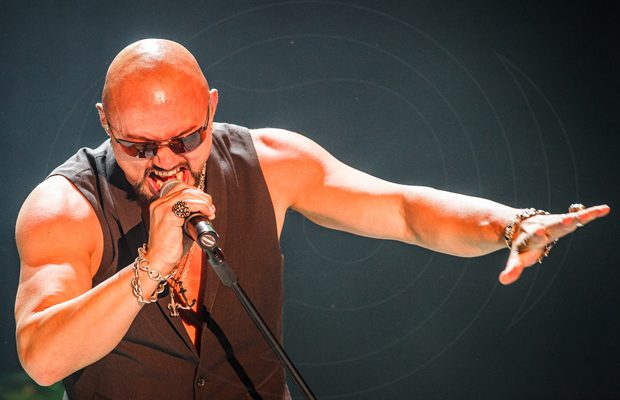 Craig Terlino of Dig Boston recently conducted an interview with QUEENSRŸCHE singer Geoff Tate. A couple of excerpts from the chat follow below.

Dig Boston: One QUEENSRŸCHE album that stands out more to me than any is “Rage For Order”. It was that album that made me recognize that there was something different — something innovative — going on in the music compared to other metal acts. It was cutting edge.

Geoff: Yeah, that was the idea behind it. We had done the EP and “The Warning”, and looking back on those, I thought they were very derivative of what was happening at the time with a lot of other bands. I was looking to stretch out a bit and push the chemistry of the writing, Chris DeGarmo [then-QUEENSRŸCHE guitarist] and I, really getting something unique. Neil Kernon, who produced that record, was very much of that mind as well. Dave Ogilvie as well, who at the time was working withSKINNY PUPPY and a lot of other underground punk synth.

Dig Boston: Interesting. I never made the connection between the production of “Rage For Order” and SKINNY PUPPY‘s sound. It’s industrialized digital punk and metal. Weird stuff.

Geoff: Yeah, that was a lot of the inspiration, right there. Sort of the underground. I hate categorizing music, but bands like what SKINNY PUPPY was doing at the time. We were incorporating all these styles in with our musical sensibilities. You bring all your musical influences into what you are trying to write. I mean, if your influences are AC/DC…

Dig Boston: It’s the 25th anniversary of “Operation: Mindcrime”. Noted as one of the top rock-and-roll concept albums of all time, how does it feel to be up there with THE WHO‘s “Tommy”, PINK FLOYD‘s “The Wall”? Were those the albums you grew listening to?

Geoff: Oh yeah. And they were definitely the inspiration for creating a concept. It’s something that I wanted to do from the beginning. Chris and I had talked about it for years. We were searching for a theme and playing around with concepts early on, like on “The Warning”. “Rage For Order”was definitely a concept record in its own right. Not a story so much but a setting for the one listening to get into a world of their own. Finally, with“Mindcrime”, I hit upon this story that really resonated with me.

Dig Boston: You’re also touring “Mindcrime” as a theatrical event as well as the performance. There’s a strong human element in theater compared to other mediums: void of distractions, advertisements, and in some sense technology.

Geoff: It’s a strange phenomenon. People come to shows and they spend the whole time looking at the camera. You know, rather than experiencing the show. It’s very odd.

Dig Boston: Don’t you have the advantage to address the audience maybe and tell everyone to cut the crap?

Geoff: Nah, you don’t have any control over that at all. But, I would definitely advise people to put the camera down and watch the show and get involved with it because the show is interactive. If you’re staring into a camera, you’re missing so much. Like watching a live performance on TV. It never captures the important stuff. It might give you seventeen different camera angles, but you’re missing out on the elemental importance of the live show. How you feel. It’s a group experience.

Dig Boston: I wanted to ask if there were any QUEENSRŸCHE albums that were a bitch to put together?