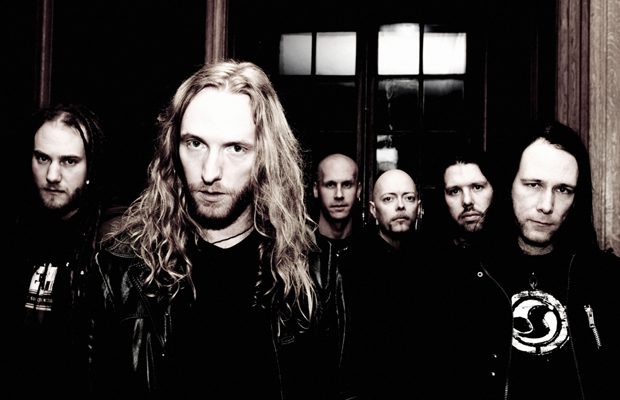 Louder Than Hell recently conducted an interview with guitarist Niklas Sundin of Swedish melodic death metallers DARK TRANQUILITY. A couple of excerpts from the chat follow below.

Louder Than Hell: You have mentioned before that you rarely feel excited for an album at the end of recording sessions because of the amount of time you spend on it, but that you feel good about “Construct” now that it is done. What about the end of the new album’s sessions is different for you?

Sundin: Well, that was something that I put on Twitter for some reason, and it got misunderstood quite a bit. What I tried to say was that a typical effect of being locked up in a studio for 2-3 months listening to every single second of the new songs over and over again is that you’re getting extremely tired of the material. At the same time as you know that you’ve created something great, there’s a part of you that never want to hear the songs again. Also, the collaborative and democratic nature of DARK TRANQUILITY means that there always are riffs and ideas that a single member doesn’t find too interesting according to his personal preferences, so what normally happens directly after a studio session is that I sit down and think that the result is OK, but if X and Y would have been done differently, it would have been even better (again: for my own tastes). In this case, there were two main parameters that were different: The members’ opinions on the material were a bit more uniform — i.e. no great clashes in taste — and the actual mixing process brought out a lot of details and nuances in the songs that we previously weren’t aware of. The result is that I for a change actually was a massive fan of “Construct” from the first time I heard the final mix. Well, as you can see, I’m not a guy that gets my opinion across very well in 140 characters, ha ha!

Louder Than Hell: Did you have a direction or “game plan” when entering the studio for the new album, or was it more business as usual, since you guys are going on ten albums? Does each album need a specific direction, or is it again a “comfort zone” thing?

Sundin: There never is a defined game plan as such; we usually start writing songs without knowing exactly where the music will take us. Every time we’ve tried to decide that the next album should go in a certain direction, it usually ends up being the complete opposite, ha ha! This time, though, we all were certain that we needed to do something different in order to find the motivation to even make a new album. It’s a similar situation to the one before “Projector” (1999) where we either could split up or do something new, and from that realization we actually succeeded in reinventing ourselves.

Louder Than Hell: America can be a worthwhile and sometimes vital market to focus on for bands, but on the other hand, it is notoriously unfriendly for touring bands, especially foreign acts because of logistics and an often-less-than-reliable concert-going population that changes city to city. How viable is it for a band like DARK TRANQUILITY to tour the U.S., and what are your opinions on it?

Sundin: Well, there are pros and cons to everything, and U.S. touring definitely has its own unique charm. Whereas most places in Europe tend to be pretty uniform, one can have drastically different experiences in the U.S., depending on what state you play in, and that’s always interesting. Some of our very best concert memories are from playing to a small-but-devoted audience on equipment that barely works, so we don’t mind that. However, since you mention logistics and obstacles, I should be candid and say that the practical conditions indeed are getting harder. It’s very rare for most European bands to even break even on a U.S. tour because of the high expenses for work visas, permits and flights as well as the artist taxes. In addition, more and more clubs are charging a ridiculously high percentage of merch profits to allow you to sell shirts, eating into the only potential tour income there is. The fact that the U.S. dollar has lost a lot of its value in relation to some European currencies doesn’t help either, so for a band in our position, U.S. touring is mainly a labor of love that’s done to keep the band “alive” overseas and to meet longtime friends and supporters rather than expecting any monetary rewards.

Read the entire interview from Louder Than Hell.