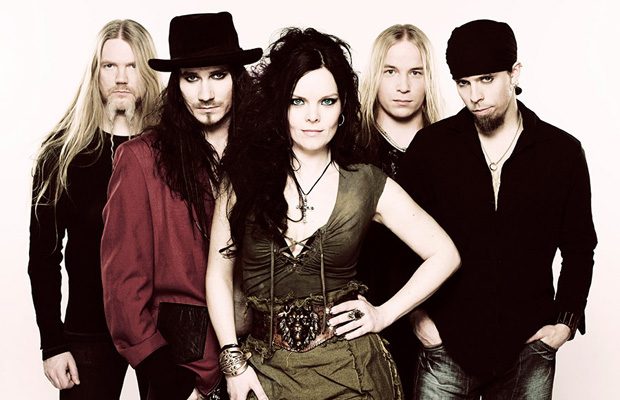 Tuomas Holopainen (keyboards) and Marco Hietala (bass) of Finnish symphonic metallers NIGHTWISH took part in a press conference prior to the Russian premeire of their “Imaginaerum” film — based on the band’s album of the same name — on May 28 at Cinema Center at Krasnaya Presnya, Moscow. Video footage of the question-and-answer session can be seen below (courtesy of GameScope.ru).

The “Imaginaerum” film was released theatrically in Finland on November 23, 2012.

The movie had its premiere on November 10, 2012 at Hartwall Arena in Helsinki, Finland, where the audience was treated to both a full-scaleNIGHTWISH concert and the first-ever public screening of the movie.

The “Imaginaerum” screening at Hartwall Arena waspreceded by a show by the musicians in NIGHTWISH themselves in what was their final concert in Finland last year.

The official soundtrack of the movie, “Imaginaerum By Nightwish: The Score”, was released on the day before the premiere — Friday, November 9. The album features 13 grandiose, unreleased re-interpretations of“Imaginaerum” tracks by Petri Alanko.

Eagerly anticipated around the world, “Imaginaerum” creates a musical fantasy world in the vein of David Lynch, Neil Gaiman, and Cirque du Soleil. The movie is an innovative mixture of story-telling and music, an extraordinary tale of the power of imagination… and what’s ultimately important in life.

Shot and post-produced in Canada, the movie was directed by Stobe Harju and produced by Solar Films, and features appearances by allNIGHTWISH members. The screenplay is based on a wild vision thatTuomas Holopainen, the mastermind of the band, devised after the album “Dark Passion Play” came out in 2007.

“Imaginaerum” is one of the projects which received grants from the Finnish government institution called the Finnish Film Foundation. The movie, directed by Stobe Harju, about an old man on his deathbed who glimpses a childhood dream in which he refuses to grow old, and fights aging with his imagination, reportedly got $575,000 toward its $3.7 million budget.

During a September 2011 interview with Petri Silas of Finland’s Soundimagazine, NIGHTWISH mainman/keyboardist Tuomas Holopainenexplained that all the filming for the “Imaginaerum” movie was done in Canada with mostly Canadian actors/actresses. Post-production took place in Canada and Finland. He aso revealed the names of the actors who have two of the main roles in the film: Marianne Farley and Quinn Lord.

Speaking to Loudwire, Holopainen stated about the plot of the“Imaginaerum” film, “Basically it’s about this old guy who used to be a composer and he’s really sick; he’s lying on his death bed in a hospital and he’s going through his life, through his dreams — that’s the basic storyline. It’s all about praising life and life’s beauty, imagination and all the strife and the bad stuff we have to face.

“[The storyline] came from the director; I just had the twelve ideas, the twelve visions. He basically wrote the script and storyline around those originally visions and the only one we had to leave out was the ‘Ghost River’ part, because we didn’t have the finance to realize that vision.”

Asked if the band appears in the film at all, Tuomas said, “A little bit, we are seen in two different scenes as a band, playing in the background. That’s something that I really emphasized to the director, ‘Please don’t put the band into the movie,’ because we want to do a believable story and we have no idea how to act. We are not actors so if your give us some lines and we tried to act, it would look goofy. He insisted to put us into the movie because it’s our brainchild, so we’re just playing in there as a band; it’s a good compromise.”