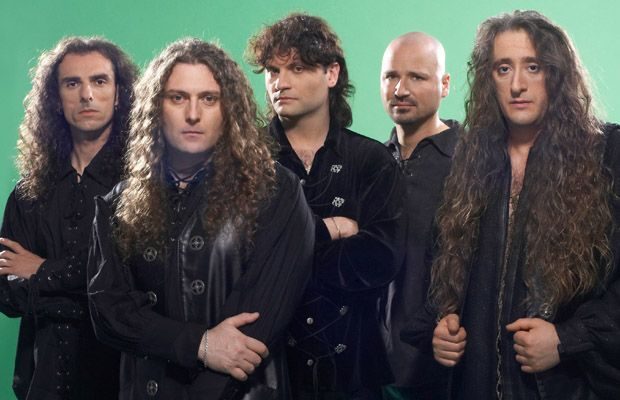 Italian symphonic metallers RHAPSODY OF FIRE have “respectfully” parted ways with their American guitarist Tom Hess due to “philosophical differences.” The band states: “RHAPSODY OF FIRE and Tom both sincerely wish each other the very best for their respective futures.”

RHAPSODY OF FIRE released a new live album, “Live – From Chaos To Eternity”, on May 3 in Europe and May 7 in the USA via AFM Records. It was made available as two-CD digipak and as limited three-vinyl set. The material (a mixture of old classics and newer tracks) was recorded on the band’s latest European tour in spring 2012.

Video footage of RHAPSODY OF FIRE performing the song “Dawn Of Victory”, taken from “Live – From Chaos To Eternity”, can be seen below.

The most recent RHAPSODY OF FIRE lineup made its live debut on April 6, 2012 at the PPM Fest at the Lotto Mons Expo in Mons, Belgium.

Staropoli and RHAPSODY OF FIRE guitarist Luca Turilli in 2011 announced their decision to go their separate ways.

Due to legal reasons, Staropoli is continuing under the RHAPSODY OF FIRE name. Turilli, on the other hand, is making his efforts available under the RHAPSODY moniker (RHAPSODY OF FIRE‘s original name), in which he is joined by guitarist Dominique Leurquin, bassist Patrice Guers, singer Alessandro Conti (TRICK OR TREAT) and drummer Alex Landenburg (AT VANCE, ANNIHILATOR, MEKONG DELTA,STRATOVARIUS).

RHAPSODY OF FIRE‘s latest album, “From Chaos To Eternity”, was released in North America on July 12, 2011 via Nuclear Blast Records. Described by the band as “the natural evolution” from 2010’s “The Frozen Tears Of Angels”, the CD marks RHAPSODY OF FIRE‘s final release based on the fantasy saga started in 1997 with the group’s debut album,“Legendary Tales”.