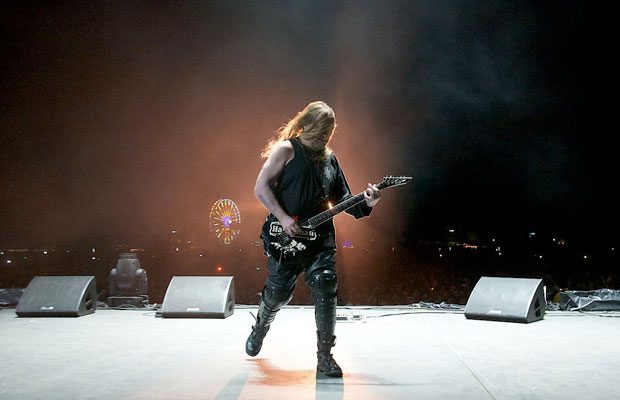 A five-minute video report from Artisan News on the May 23 public memorial celebration for SLAYER guitarist Jeff Hanneman at the Hollywood Palladium in Los Angeles, California can be seen below.

Check out photos of the event:

Hanneman recalled in a 2011 interview with Classic Rock magazine that he initially didn’t even feel the spider bite, adding, “But an hour later, I knew that I was ill. I could see the flesh corrupting. The arm was real hot. I got to the emergency room, and thank god the nurse knew straight away what it was . . . At that point, I was an hour away from death.”

Hanneman was well known for his aversion to the spotlight, avoiding interviews and even turning off his phone when he was not on tour to spend time with his family. He is survived by his wife Kathy, his sisterKathy and his brothers Michael and Larry.

SLAYER was founded in 1981 in Los Angeles and went on to become one of most popular bands of the speed/thrash metal movement, eventually being considered one of the “Big Four” alongside METALLICA, MEGADETHand ANTHRAX.

While never a band that got any substantial radio airplay, the group has long been considered a major influence on the metal genre and acclaimed as one of the best live metal acts of the past 30 years.

SLAYER guitarist Kerry King received a huge ovation from the crowd at the Revolver Golden Gods awards show on May 2 at Club Nokia in Los Angeles, where he said that Hanneman would have wanted “noise” rather than a moment of silence and then drank two shots in his bandmate’s honor.

SLAYER drummer Dave Lombardo sat out the band’s recent Australian tour due to a contract dispute with the other members of the group. Filling in for him was Jon Dette (TESTAMENT, ANTHRAX). Lombardo has since been replaced by Bostaph, who was SLAYER‘s drummer from 1992 until 2001 and recorded four albums with the band.