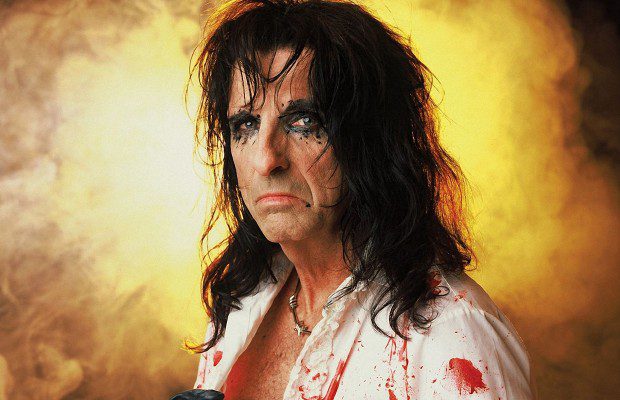 Legendary rocker Alice Cooper has told The Oakland Press that he is working on a covers album featuring songs that were originally written and recorded by THE DOORS, Jimi Hendrix, John Lennon and THE WHO, members of the so-called “Hollywood vampires” of the early and mid-’70s. A 2014 release is expected.

Back in March, Cooper told RollingStone.com about the upcoming CD: “We do a thing in our show, which is a tribute to Hollywood Vampires, my drinking club,” Cooper explained. “And it was Keith Moon, John Lennon,Harry Nilsson, Micky Dolenz — a very eclectic bunch of drunks. Half of them are dead, so we do four songs in the show in tribute to them. We do‘Break On Through’, ‘Revolution’, ‘My Generation’ and Jimi Hendrix‘s‘Foxey Lady’. I just kind of said, ‘We’ve never done a covers album, let’s think about that.’ So [producer Bob] Ezrin and I are kind of bouncing it around right now.”

Asked what some of the wish-list songs are, Cooper said: “I would keep it right to about ’73, ’74. I don’t want to just go anywhere. I want to keep it right in that sort of drunk era, so it’s specific. I would say ‘Break On Through’, that’s a really good rock track there. The other ones, think of it — Harry Nilsson, there’s a lot of good stuff there that could be rocked out. I think of songs as being clay. Take a song like ‘Jump Into the Fire’and take that to a harder level, and that’ll work.”

Recorded with longtime collaborator Bob Ezrin, who produced the original multi-platinum “Welcome To My Nightmare” album in 1975, “Welcome 2 My Nightmare” picks up right where they left off, with Alice trapped in his own warped mind.

“I think if we ever take Alice Cooper to Broadway, it would just be called‘Nightmare’,” Cooper told The Oakland Press. “‘Welcome To My Nightmare’ would be the first half and ‘Welcome 2’ would be the second half. That would work. That idea’s always out there; you just have to wait until a producer comes long and says ‘I love that idea.’ I think maybe a little more time needs to go by before ‘Nightmare’ becomes sort of an American classic; then we’ll have that validity to go and do the (Broadway) show.”