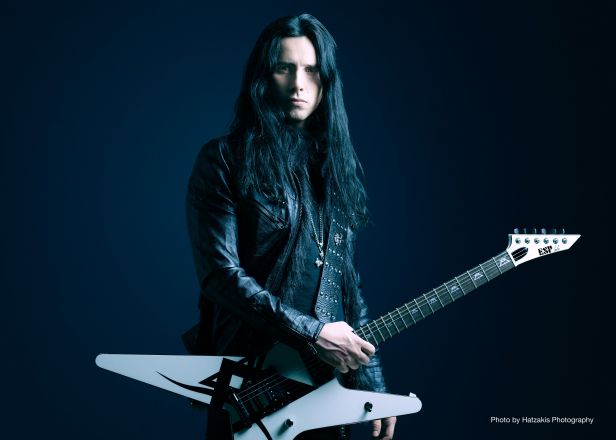 FIREWIND and OZZY OSBOURNE guitarist Gus G. (real name: Kostas Karamitroudis) joined Los Angeles glam-metal jokesters STEEL PANTHERon stage this past Monday, July 22 at the House Of Blues in West Hollywood, California to perform the OZZY classic “Crazy Train”. Fan-filmed video footage of his appearance can be seen below. Photos are available at this location.

STEEL PANTHER recently spent time in the studio putting the finishing touches on its third full-length album at a studio in Sherman Oaks, California with producer Jay Ruston (ANTHRAX, STONE SOUR,MEATLOAF) for a fall release.

Speaking to the South Bend Tribune, STEEL PANTHER drummer Stix Zadinia (real name: Darren Leader) stated about the band’s as-yet-untitled new CD: “If you liked [2009’s] ‘Feel The Steel’ and [2011’s] ‘Balls Out’, you will love this record. It is more heavy metal songs that are hooky and great and fun and make you want to rock and make you want to have a good time and party. Also, there is a lot of riffage on this album that I think anybody who has ever questioned this band — ‘Oh, those guys wear spandex and it is 2000-whatever’ — these songs are going to put all of that to rest.”

Regarding naysayers that say STEEL PANTHER is a joke-metal band,Zadinia said: “Listen to our record and tell us that our songs aren’t better than most of the bands out there. How funny is that? At the end of the day, it comes down to the songs. I think our songs — without sounding egotistical — I think our songs are great. When you hear the hooks in our songs, you hear the playing and you hear the vocals, you throw that up against any band in any era, and I think it stands up.”