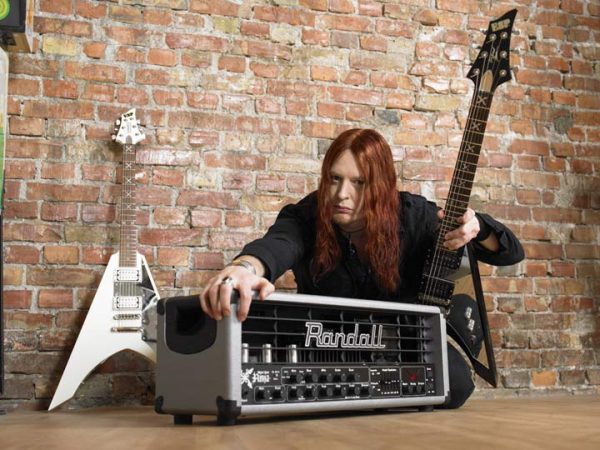 In the October 2013 issue of Decibel magazine, bassist/vocalist Jeff Walker and guitarist Bill Steer of reactivated British extreme metal pioneers CARCASS spoke about the band’s split with guitarist Michael Amott and drummer Daniel Erlandsson, who had been touring with CARCASS since the group’s reunion was announced in 2007.

“In all honesty, once Michael had stepped out of CARCASS again, that’s when we could entertain the idea of doing the new record,” Steer revealed. “He’d made it very clear from the outset that he’d no interest or belief in there being a new CARCASS record. It’s really hard to tell if maybe he felt we were incapable of doing it, or if maybe he was just speaking out of loyalty to [his main band] ARCH ENEMY. I don’t know. But once the reunion shows were over, Michael basically said, ‘Look, I’m gonna be busy for a few years — you guys do whatever you’re gonna do. That meant Jeff and I could talk seriously about doing new material, because neither of us were being pulled in another direction like Michael was. CARCASS had become our main band and had priority treatment.”

When Amott split, Erlandsson followed. “It’s very much a package deal with those two because they’re in the same band, and they’ve invested so much in it,” Steer offered. “There’s no way that either Jeff or I could condemn them for doing that because ARCH ENEMY is their thing — especially for Michael. It’s a band that’s made its name from his direction — obviously his lady [ARCH ENEMY singer Angela Gossow] is involved, and until recently his brother was. So, it’s always gonna mean more to him than CARCASS, and we can understand that.”

“I wouldn’t expect any different, honestly,” Walker concurred. “ARCH ENEMY is Mike‘s band. So are SPIRITUAL BEGGARS. And CARCASS is our band. It just doesn’t mean as much to him as it does to me and Bill. We’ve been doing this since we were 17. The best way I can put it is this: Any band that Bill or I play with — whether it’s BRUJERIA, ANGEL WITCH or GENTLEMANS PISTOLS, CARCASS is our priority.

With Mike, this would never be his priority.” According to Walker, Amott changed his mind once he heard that Jeff and Bill were actively working on new material. “The reality is that Mike was very keen, more than anyone, for CARCASS to reunite,” Jeff said. “A few years later. he wasn’t keen for the reunion to continue, and he wasn’t keen on the idea of CARCASS doing a new album. This is despite the fact that he contacted me, after we were a year into the songwriting, because he heard we were doing a new album, and indicated that he wanted to be involved. I think Bill had an exchange with Mike about this and gave Mike an opportunity to put his cards on the table, [but] it became clear that Mike wasn’t really interested enough to walk away from any of the projects that he’s involved in . And don’t get me wrong — we’ve never expected that of anyone . But I think it could be fitted around each other’s projects. I still do BRUJERIA, you know?”

When Decibel contacted Amott via e-mail to ask why he didn’t participate in the new CARCASS album, he told the magazine, “Nothing happened, per se. In 2010, after two years of reunion shows and tours with CARCASS, I started working on a new ARCH ENEMY record and touring cycle. In the meantime, I guess Bill and Jeff started making new CARCASS music, which to me makes a lot of sense, actually. It’s what they should be doing. Anything else would be a terrible waste of talent and opportunity, in my opinion. I am very happy for them and the fans of the band. I’ve not heard any of the new music yet, but there is no doubt in my mind that they can still deliver.”

CARCASS‘ new album, “Surgical Steel“, will be released on September 16 in the U.K., September 13 in the rest of Europe and September 17 in North America via Nuclear Blast Records. The effort was produced by Colin Richardson (FEAR FACTORY, MACHINE HEAD, NAPALM DEATH, SLIPKNOT, BULLET FOR MY VALENTINE) and mixed by Andy Sneap (MEGADETH, ACCEPT, EXODUS, ARCH ENEMY).