JOEY JORDISON On Next SLIPKNOT Album: ‘We’ve All Got A S**tload Of Riffs’ 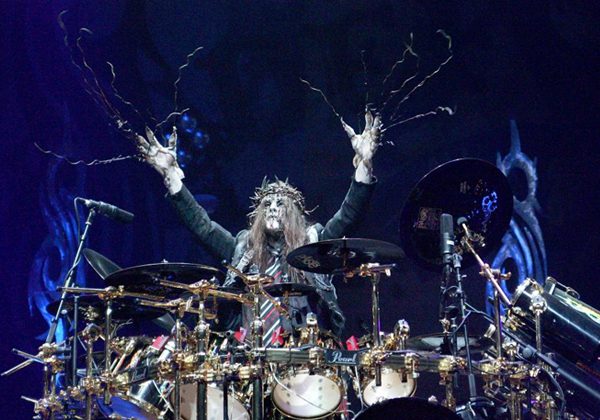 ARTISTdirect.com editor-in-chief Rick Florino recently conducted an interview with SLIPKNOT and SCAR THE MARTYR drummer Joey Jordison. A couple of excerpts from the chat follow below.

ARTISTdirect.com: The album becomes an epic journey from start to finish. You’ve got to listen to it from beginning to end because there’s so much going on, and it’s all connected in a fluid way.

Jordison: You know, it’s really cool that you noticed that. When I was writing all of that shit, I’d complete a track and be like, “Alright, what am I feeling? What would be cool after this track? What emotion am I going into right now? What am I hearing in my heard right now? Where should I go?” It wasn’t like I was writing a song and saying, “Oh, we’ll just try to fit it in somewhere”. It was like I’d right one song and think, “What am I feeling next?” Sometimes, it would take a while, and I’d have to listen to a song over and over. However, every song was an emotional result of a previous song. I completed this song and now where am I going? It’s cool that you picked up on it because that’s exactly what it is.

ARTISTdirect.com: What’s your favorite memory of [late SLIPKNOT bassist] Paul Gray from “Vol. 3: The Subliminal Verses“? He’s all over that record…

Jordison: Oh yeah, he is. Man, what is not a good memory of Paul? You know? They’re all great. His room was directly underneath mine. I remember one night we were sitting up late and listening to rough tracks of the record. I remember Paul looking around the room and saying, “This is the best work we’ve ever done!” I was like, “You know what? It is!” He was like, “This is the best we’ve done to date, man”. I said, “Absolutely.” We were sitting in his room playing guitar until late at night. It was one of those nights where we just connected about music and were reflecting on all the songs. If you see those pictures that Shawn [Crahan, SLIPKNOT percussionist] took on the inside of the record sleeve, one of those was the doorway to Paul‘s room. That’s where we hung a lot and connected on music and tracks we were doing at the time. It was a special time when we made that record in the Houdini Mansion.

ARTISTdirect.com: Where are you in terms of writing for SLIPKNOT?

Jordison: Whenever I pick up a guitar and I’m not doing anything, I’m always writing riffs. That’s all we’re doing. We’ve all got a shitload of riffs. We’re always writing. Even though we haven’t gotten together, there’s plenty of material there. We talk to each other all the time on our cell phones and all of that when we’re on tour in different spots of the world. We’re all working. It hasn’t found its time yet. We’re continuing to write though. We’re always writing. We’re going to have so much shit, it might have to be a double record. [laughs]

Read the entire interview at ARTISTdirect.com.