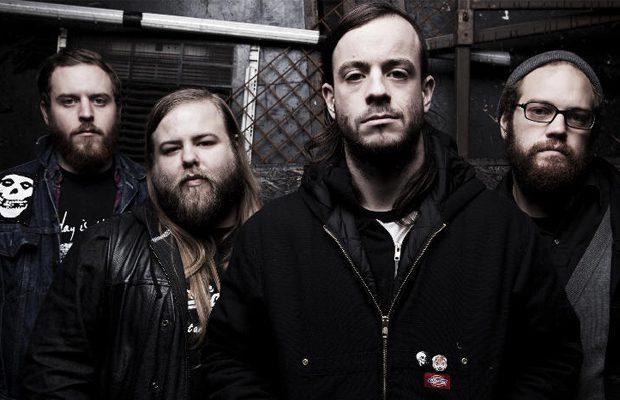 “R.A.T.S.”, the new video from Canadian metallers CANCER BATS, can be seen below. The song — which features guest vocals from Rob Urbinati of SACRIFICE — comes off the band’s fourth full-length album, “Dead Set On Living”, which was released in the U.S. in April 2012 via Metal Blade Records.

Shot in Bulgaria during CANCER BATS‘ recent trek through Europe, the “R.A.T.S.” video follows a man who has recently been terminated from his employment.

“We’ve been very lucky to experiment as much as we have,” said CANCER BATS vocalist Liam Joseph Cormier. “I love that we can have thrash songs, hardcore songs, and the more QUEENS OF THE STONE AGE or KYUSS kind of groove-based tunes.”

Thematically, the album offers a strong focus on the bilateral relationship of dark and light, destruction and construction, life and death. The title track, for example, refers to a close friend of the band who ended up in the hospital in serious condition; only to have the experience cement his will to survive. “Road Sick”, as the title may imply, finds Cormier struggling with the hardships that come with a career spent on the road.

“Our lives are all about touring, but that song is more universal,” Cormier revealed. “It’s really for anyone away from their loved ones, dealing with that situation.”

Still, whereas 2010’s “Bears, Mayors, Scraps & Bones” had a much darker tinge, “Dead Set On Living” strikes a tighter balance between the opposing forces and brings listeners closer to the light at the end of the tunnel by encouraging them to push through peril. “We all reach these dark places where we feel angry or alone,” said the singer, “but that gives us a reason to pick ourselves up and strive to make something better.”