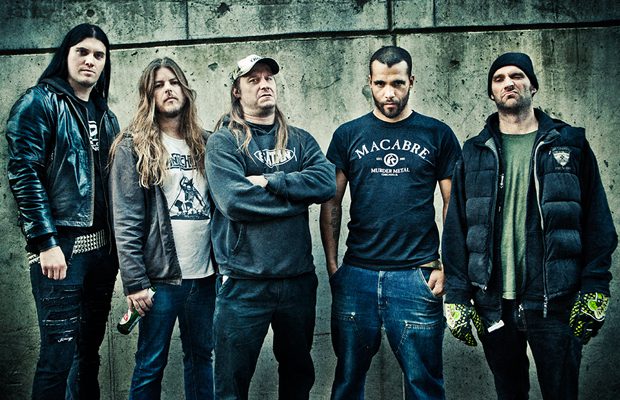 Says Alex: “We will be performing ‘Clandestine’ as arranged by Thomas Von Wachenfeldt and it will be the first time in 17 years that me, Uffe and Nicke play together again as ENTOMBED.

“We are all very excited to start working on this project and look forward to see where it’ll take us!”

ENTOMBED previously performed “Clandestine” in its entirety with the Nordic Chamber Orchestra on April 12, 2013 at Tonhallen in Sundsvall, Sweden. A recording of the song “Blessed Be” from that show can be streamed using the audio player below.

Hellid did not participate in the writing and recording of “Back To The Front”, the recently completed album by a completely different band calling itself ENTOMBED, featuring vocalist — and sole original member — Lars Göran Petrov alongside Olle Dahlstedt (drums), Nico Elgstrand (guitar) and Victor Brandt (bass).

Asked in a recent interview with France’s MetalChroniques.fr if the omission of Hellid‘s name from the ENTOMBED biography accompanying a promotional copy of “Back To The Front” was a mistake on the record label’s part, Petrov replied: “I do not want to speak publicly about this at the moment; this is something we want to keep internal and private for now. But this is not an error in the biography. Next question?”

Century Media Records announced earlier in the week that the release date of “Back To The Front” was being pushed back to early 2014 from the previously announced October 29 due to “unpredictable technical problems.”

Hellid did not accompany the Petrov-fronted lineup of ENTOMBED when the band performed at the Manizales Grita Rock festival in Colombia last month.

ENTOMBED performing “Blessed Be” with Nordic Chamber Orchestra on April 12, 2013 at Tonhallen in Sundsvall, Sweden (audio):