ANNIHILATOR’s JEFF WATERS: ‘I Never Gave A S**t About Image Or What I Looked Like’ 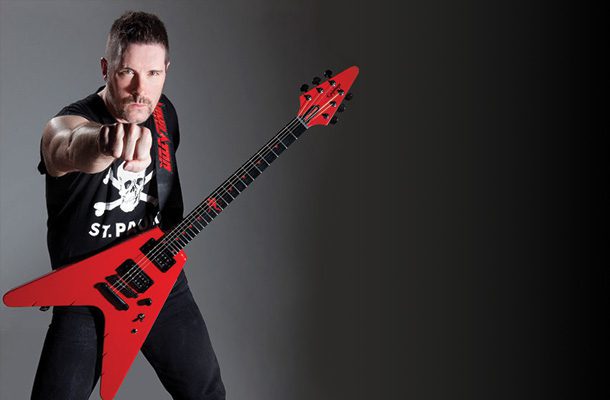 Robert Cavuoto of Guitar International recently conducted an interview with ANNIHILATORguitarist/mainman Jeff Waters. A couple of excerpts from the chat follow below.

Guitar International: How do you rate [the new ANNIHILATOR album] “Feast” compared to your other CDs?

Jeff Waters: My favorite albums are “Never, Neverland” from 1990 and “King Of The Kill”, from 1994. That one was never released in North America, but was a massive album in Asia, Japan and Europe. The tour for that record was just ridiculous and beyond my dreams. I was singing on the album, so it was even more of an unexpected thing as I’m not really a singer. So, to have me sing, play guitar and sell more records than I’ve ever sold, was just stupid luck. Then “Schizo Deluxe”, from 2005, it was a very underexposed record. The label president at the time died in a car accident before the release of the record. It meant that the label temporarily stopped. That was a really shitty time for the label and his family. I wish everybody had heard that album. I think it’s coming out as a re-release next month with the new label. And then the fourth one would be the newest one — “Feast”.

Guitar International: Are you content with the public’s perception of ANNIHILATOR‘s place within thrash metal’s history?

Jeff Waters: I never gave a shit about image or what I looked like. Things like that were important to a lot of bands. It sounds stupid and defiant, but it’s just that I never cared about it. I just play my music, and we were lucky enough to have things going so well that we didn’t have to care about that kind of thing. We intentionally and unintentionally dropped out of our own country and the United States in 1993, at a time when traditional heavy metal in the ‘80s and thrash metal was literally dropped by their labels. That was back in the grunge era. Unless you were PANTERA, BIOHAZARD or SEPULTURA, or along those lines, you were done. There was nobody who wanted to book you, sign you, or do press for you. Obviously, the bigger ones kept going, but they all downgraded and ducked down in North America. JUDAS PRIEST went from playing the stadium in Vancouver to the clubs with Ripper Owens. SLAYER was playing arenas, and they went down to playing clubs in Vancouver. You really had a lot of bands being tested to see if they really had the love of their music. Do you guys want to downgrade and still put records out, or do you want to say fuck it and retire? There’s a good core of these bands who said, “Fuck this; we’re going to do this,” and we were one of them. It’s what we love to do. And SLAYER were the top guys here that took a big hit for ten years but never stopped, never gave up and just kept going. That’s my favorite band for carrying metal on through to this point. There’s another group of guys — TESTAMENT, EXODUS, OVERKILL — that a lot of Americans and Canadians don’t realize that ANNIHILATOR are part of that group overseas. We all took a hit; we all were struggling. We all had to fight for deals; we all had ticket sales go down; we all had record sales go down, and we all had big lineup changes and frequent ones. We did not like just bail and quit and say, “Screw it” and get a “real job,” only to reunite 10-15 years later when metal was popular again. The bands I mentioned to you were mid-level bands that just went through hell and never stopped. We always released records and always kept touring. KREATOR, DESTRUCTION, EXODUS, OVERKILL, TESTAMENT andANNIHILATOR are having some of our biggest record sales in 15 years. And TESTAMENT is just kicking ass around the world right now with their music and touring. So, yeah, it’s a good time. To answer your question, if I didn’t have the support from Japan, Asia and Europe, all through the ’90s and 2000s, I wouldn’t have been able to continue and would probably would be a bitter, old man right bitching about the business and what could have been, and what I used to be. I’d probably be really depressed. This is my life, and it’s what I love to do. I’m glad I’m still doing it. It’s also nice to see a lot of the press coming back, or new press discovering us. It’s pretty awesome.

Guitar International: You alluded to this earlier about having so many member changes. How has that impacted the band over the years?

Jeff Waters: The crazy part about ANNIHILATOR is we actually stand out as an incredibly unique band, if you look at our story. It’s basically a solo project, marketed as a band, who only became a band in the last 10 years with Dave Padden. Those first four records had four different singers on them, and in different parts of the world, were hugely successful albums. I don’t think any band’s ever had four singers on the first four albums and all four were big-selling records. That’s not really supposed to happen. I wanted to have a band, but I ended up writing and playing bass on the demos. I said, “I can play it better, so I might as well play it.” I’d write all the guitar parts and most of the vocals, melodies and lyrics. I’d write the drum parts and jump behind the drum kit and show the drummer what I wanted with the song. It became clear to me pretty quickly that, “Oh, I guess this isn’t called a band; it’s more like a solo project.” I would hire musicians for the tours, and for the record I would get a singer and I’d hire a drummer. So it was two stages — find a drummer and singer for the record. And then when that was done, I would try to keep the singer for the tour cycle and look for the rest of the band. It was the weirdest way of running a band and confused the hell out of everybody. When you’re rotating musicians like that, the first thing that comes to mind is what an asshole this guy must be and hard to work with. It was actually the opposite. I loved working with different drummers and bass players. Out of the many musicians we had, I’d only had disputes or problems with three of them. And that was usually due to drugs and alcohol. Sometimes it was my alcohol use that was causing the problems. But generally it’s been a very friendly, fun band that many musicians have emailed me and say, “Hey, can I come on tour with you?”