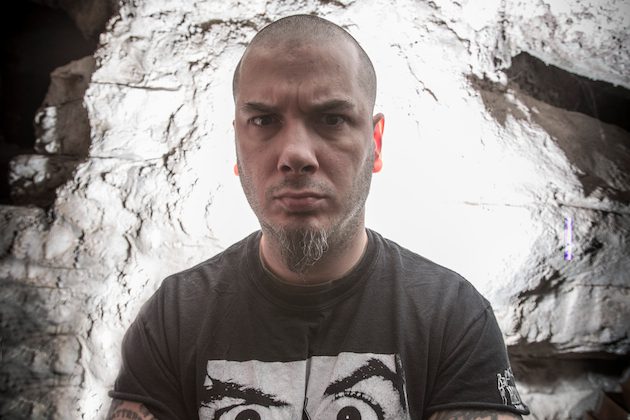 John Parks of Legendary Rock Interviews recently conducted an interview with former PANTERA and current DOWN frontman Philip Anselmo. A couple of excerpts from the chat follow below.

Legendary Rock Interviews: What surprised me about [your debut solo album] “Walk Through Exits Only” is that, with all due respect to DOWN and all of your other projects, this little blast of energy feels like the most out-and-out “fun” record you’ve been involved with since PANTERA‘s “Reinventing The Steel”.

Anselmo: Oh, thank you so much, brother; I really appreciate that. I appreciate that so fuckin’ much. I wanted to show people a different side of the old sense of humor of me, in a way. There’s a lot of tongue-in-cheek, sarcastic fucking things that I say on the record that could be taken one way or another. I think that sometimes when you listen to a band or a performer who’s supposed to be very rebellious or anti-authority, sometimes it can be a bit of a letdown, so to have that shock value back in there. Take the songtitles, or the whole fuckin album title, “Walk Through Exits Only”. I’m not the type of motherfucker that’s gonna sit here and spoonfeed the fuckin listener. I’d rather have people take something and listen to it and make it their own, really. Sometimes I feel compelled just to write a line that could mean a hundred things to a hundred different people. Let me put it to you this way: I like to architect things lyrically and let people themselves finish the building I’ve begun, so to speak.

Legendary Rock Interviews: I’m glad you mentioned the title track. That is just so fitting, and obviously, it could be interpreted as a classic “fuck you,” but there’s music history commentary and all sorts of other shit I’m reading into it as well.

Anselmo: When you take the hook line from the verses, where I say, “It’s ruined, everybody ruins music…” For me, it’s, like, you’re always gonna have your critics. You can name any band that puts out any record, it’s gonna be loved and it’s gonna be hated. Music’s like food — you can love it or hate it or be indifferent to it or you grow to like it eventually. So I know that no matter what I did, I could have just fuckin’ done a violin-and-spoon record with nothing but yodeling, and some people would have loved it and some people would have fuckin hated it. God knows we put a lot of effort into this record and all that, but still, at the end of the day, it’s up to the people to make up their own minds as to how they take it. For me, it’s like, fuck it. It’s gonna be what it is and people are gonna feel they way they’re gonna fuckin feel about it. What can I do about it? Nothing. Put one foot in front of the other and keep on fuckin truckin’; that’s what I’m gonna do.

Legendary Rock Interviews: You respect PANTERA‘s fanbase immensely. Do you ever feel like you are walking a line between understanding what it is they love about you and following your heart?

Anselmo: Not at all, not at all, because honestly, for me, PANTERA is a sacred thing. It’s a very sacred thing for fans and for myself, because the musicians that encompass that fuckin band are still, bar none, the greatest musicians I have ever played with, and I think that the approach to the songwriting is very, very different than anything I’ve ever done, especially because of that particular talent in PANTERA. So, it’s a sacred thing and I’ve never, ever, ever gonna tried to take the place of a PANTERA and I never will.

Legendary Rock Interviews: Some of us old-school PANTERA fans felt a little bit of vindication watching the “remastered” version of “VH1 Behind The Music” where you look right into the camera and point the finger directly at the show for their wrongdoing. Did you feel any relief in doing that or were you still thinking they were gonna spin it somehow when it came out?

Anselmo: You know what? You can’t ever tell what these assholes are gonna do, and at the end of the day, all I can do is speak the truest possible way. I’m the type of motherfucker where I speak what’s on my mind, I think that’s why people dig me to begin with, if they dig me at all, and I also think that’s why people hate me. If you’re outspoken and you say what’s on your mind, fuck… you’re gonna get stones thrown at you and that’s alright. That’s no big deal, man, that’s part of the fuckin god damn biz and whatever. But as far as the whole PANTERA story goes, what people seem to forget is that I’ve got a book coming out too on the entire subject and I’ll say this… PANTERA, for me, is a whole lot more than its demise. There are some incredibly positive PANTERA memories that far, far outweigh the breaking up of the band and all the negativity.