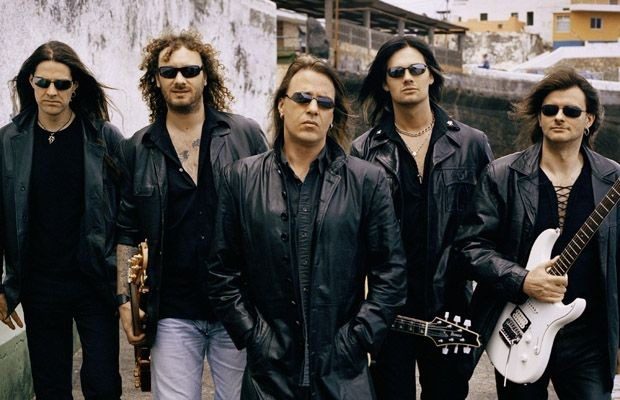 David E. Gehlke of DeadRhetoric.com recently conducted an interview with guitarist Michael Weikath of German power metallers HELLOWEEN. A few excerpts from the chat follow below.

DeadRhetoric.com: The thing a lot of people would like to see is a reunion with Michael[Kiske] and Kai [Hansen]. Is that a possibility?

Weikath: We will do that too. We’ve given thought to that and we’ve heard his [Kiske‘s] words that he doesn’t like when people dream about those things in public in interviews. I’ve only merely been answering the questions of those wondering about [it], so I haven’t been dreaming. I don’t need that reunion as much as he wants it, or doesn’t want it. If he ever gives in to any of that, then you can swear we’d probably try something like that. Maybe make some good money and have some fun on occasions where people are enjoying what we’re doing then, as that particular strange outfit for the actual existing HELLOWEEN, with a few ex-members intertwined and you wouldn’t know.

DeadRhetoric.com: It would probably be something where you just do shows, but not a new album.

Weikath: I don’t know…you never know. I heard someone say something like this, but I don’t know where I heard it. It’s clearly not a suggestion from the inside of the band or management, but I’ve heard people say that.

DeadRhetoric.com: Your first time in North America. When was it?

DeadRhetoric.com: Was that with GRIM REAPER and ARMORED SAINT, right? What do you remember?

DeadRhetoric.com: Was that your first full-blown tour with Kiske?

Weikath: That was it. We started with OVERKILL and did the European tour, like London, Hammersmith, the U.K. tour, then the American leg of it.

Weikath: I’m not sure which occasions he was there. He might have been in L.A. or Japan. He didn’t have anything to do with the general touring or whatever. He was basically sitting at home collecting money, and when there was something interesting, he would show up.

DeadRhetoric.com: I talked to him a few weeks ago.

DeadRhetoric.com: He seems to be in a good spot right now, probably better than when you guys were working together. We talked about the whole Sanctuary debacle, which I’m sure you’d like to forget. [HELLOWEEN were sidelined for nearly two years in the early ’90s due to a legal battle with Noise Records over Sanctuary Management doing a direct deal with Germany EMI, which was ruled as breach of their contract with Noise — Ed.]

Weikath: If he would have been any cool, he would have said, “Okay, we’ll do contract renegotiations.” No freakin’ problem, just act cool, Karl. I actually expected that out of him, but somehow he disappointed me for being so freakin’ uncool. He got all the trouble he went through with the lawyers; he’s got a pacemaker and stuff, I don’t. He still, I think, manages to drive women who are actually interested in him away. Whatever, you just have to consider these things and see how happy is somebody.

DeadRhetoric.com: You made it through that rough period, though, after “Pink Bubbles” and“Chameleon”.

Weikath: I would have liked 36 million marks, too.

DeadRhetoric.com: Was that the settlement?

Weikath: No, it wasn’t the settlement — it’s what he made on the band HELLOWEEN — he made 45 million marks. That’s what our ideas and musical concepts were good for at that time.

DeadRhetoric.com: He said one thing to me that stuck out: That you, Michael, and Kai each approached him about doing your own solo albums. Is that true?

Weikath: There was simply no way to do that, because he wasn’t interested in that. That could have prevented stuff, like for instance the “Chameleon” record. If everyone would have been able to try like a solo record, we wouldn’t have needed to do something like the“Chameleon” album.