TOM ARAYA On Next Album: ‘This Record Has To Be Something Special, It Has To Be Extraordinary’ 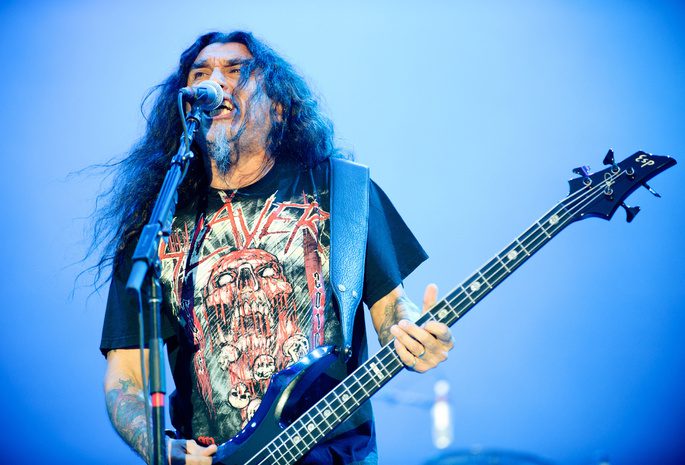 Sean McCourt of MetroActive.com recently conducted an interview with SLAYER bassist/vocalist Tom Araya. A couple of excerpts from the chat follow below.

Araya: “There was a lot of stuff that we had already lined up to do, and then we got the news about Jeff [Hanneman, SLAYER guitarist] passing — so at the moment it’s more about fulfilling obligations. After this tour is over, we have to sit down and really discuss what the plans are, what the future is.”

“We’re moving forward, and finishing up the year, basically so everyone can have closure. It will allow fans to have closure too and we can all remember Jeff one last time.”

On the public memorial for Jeff Hanneman, which was held in late May at the Hollywood Palladium:

“We have a banner that we had made with Hanneman‘s name on it and at the end of the set we drop it and the whole place goes nuts. I’m touched by that alone, that the fans have been very supportive, and coming out in droves.”

On the songwriting process for SLAYER‘s next studio album:

Araya: “In the course of rehearsals [before he got ill], Jeff brought in two or three things he was working on and I thought it was awesome. It was really cool, but he never brought us finished products, they were things he was still working on, and that’s the stuff I want to see if I can find. I want to see how far he got with a lot of that music, because it was just amazing stuff; we listened to it in jaw-dropping awe.”

“This record has to be something special, it has to be extraordinary — it can’t just be another SLAYER record. There’s a lot on the plate for the band, and we’ve gotten quite a bit of support from a lot of fans. We’ve also gotten a lot of negative feedback about things that we’ve done [over the years], so we’ll see what the future holds. Usually our attitude about that has been, ‘Fuck ’em!’ It seems to have worked for us so far, so I doubt we’ll change that aspect of the band.”