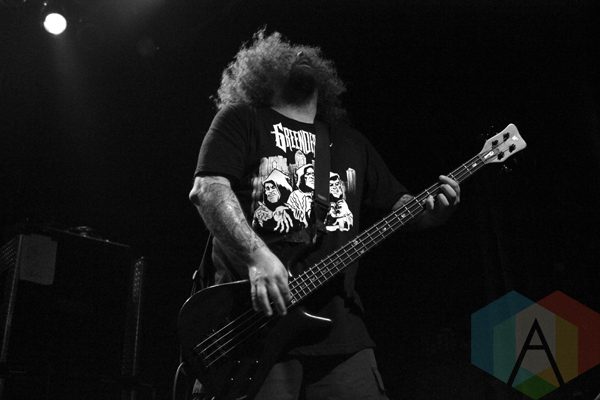 TRONOS is the name of a project featuring Shane Embury (NAPALM DEATH) and producerRuss Russell (NAPALM DEATH, EVILE) alongside a slew of guest musicians, including drummer Dirk Verbeuren (SOILWORK), bassists Billy Gould (FAITH NO MORE) and Troy Sanders (MASTODON), and singer Silje Wergeland (THE GATHERING). The project, in whichEmbury and Russell both handle guitars, is currently seeking another singer “in the style of”Jaz Coleman (KILLING JOKE) to contribute most of the lead vocals on its forthcoming debut CD.

Speaking to Metal Hammer editor Alexander Milas for the “Metal Hammer” radio show onTeamRock Radio (hear audio below), Russ stated about how TRONOS came about: “[Shaneand I] been talking for years about doing a project, because we love CELTIC FROST. And then when TRIPTYKON [featuring CELTIC FROST singer, guitarist, and main songwriter Tom Gabriel Fischer, a.k.a. Tom Gabriel Warrior] came along, we were just, like, ‘Ah, my God! This is fantastic! We need to do something like this.’ But also crossed with… We have a great love of all things ambient and ‘floaty,’ like the COCTEAU TWINS. As much reverb and chorus and delay as you can put on a guitar as possible and make the most ethereal, floaty, beautiful sounds. [So we were, like], ‘How can we combine those two things together?’ So, for the past, I guess, around eighteen months, we’ve been coming up with ideas. We call it riff tennis — we have a guitar and we pass it backward and forwards. ‘OK, your go. My go. Your go. My go.’ I’ve gotta say he does hog the guitar than I do, because he’s a riff machine, as it takes me a little bit more to come up with stuff. But it was really easy; it came together so simple.”