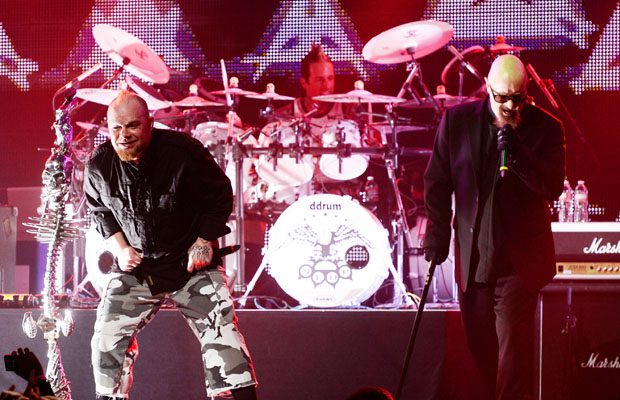 JUDAS PRIEST singer Rob Halford joined FIVE FINGER DEATH PUNCH on stage last night (Thursday, December 5) at the LG Arena in Birmingham, England to perform the song “Lift Me Up”. Fan-filmed video footage of his appearance can be seen below.

Halford is featured on the studio version of “Lift Me Up”, which appears on the first installment of FIVE FINGER DEATH PUNCH‘s masterwork titled “The Wrong Side Of Heaven And The Righteous Side Of Hell”, released in July.

During an interview with Full Metal Jackie, Halford stated about FIVE FINGER DEATH PUNCH: “I absolutely love the band, I think the band is absolutely amazing.”

He added: “I’ve been watching the band from the early days, much like I’ve been doing with much of the metal scene. I’m just feasting on it all the time especially since it’s so easy now through the Internet to pick up on things.”

Halford said he was “absolutely thrilled” to receive the invitation from the band, adding that “I was excited because I started following the band’s career and I just had a feeling they’re about to go over what we call a tipping point and I think the band’s going to explode this year worldwide, I really do. I asked for the track to be sent to me just to check it out, and as soon as I heard it coming out the speakers, I went, ‘Man, I want in on this.’

“We just bonded right away and they just have their hearts in the right place, I love them for that and I love them for the fact that they believe in themselves a thousand percent and not letting anybody get in their way. I’m just happy for them that the single is doing so good right now and I’m sure it’s going to get better over the coming weeks.”

“Volume 1” has sold more than 300,000 copies to date. FIVE FINGER DEATH PUNCH‘s three previous albums have all gone gold for sales of 500,000 copies or more.