AVENGED SEVENFOLD Bassist: Being Compared To METALLICA Is ‘A Pretty Damn Good Compliment’ 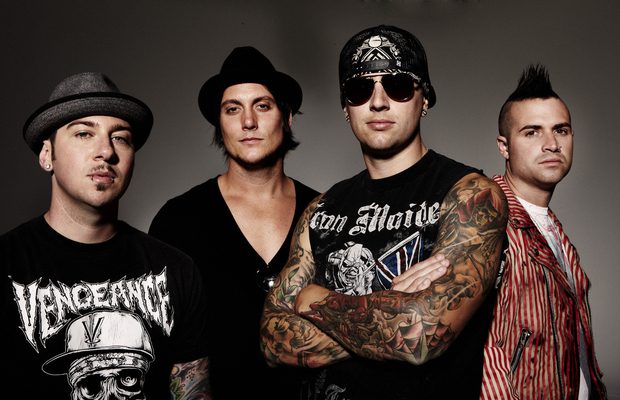 Asked about recent comments from MACHINE HEAD frontman Robb Flynn, in which Flynn called AVENGED‘s new “Hail To The King” CD a “covers album” and specifically called AVENGED SEVENFOLD out for songs like “This Means War”, which bears a strong resemblance to METALLICA‘s “Sad But True”, Christ said: “I heard a little bit about that.

“Everyone has their own opinions and they’re entitled to them.

“We’ve never been shy to admit that METALLICA is a huge influence in our lives and on our music.

“We wrote some songs, like we always do, and we got in there…

“If we’re compared to METALLICA, the greatest metal band in the world, I think that’s actually a pretty damn good compliment.”

He added: “I never really cared about [the negative things people have to say about our music]. Like I said, everyone’s entitled to their own opinion. And it’s fine. If I disagree, it’s not gonna bum me out. I just don’t have time to really sit there and worry about someone disliking what we put so much effort into.”

Christ also revealed that METALLICA drummer Lars Ulrich got in contact with AVENGED SEVENFOLD shortly after the release of “Hail To The King” and was happy about the band’s success. “Lars reached out to Matt [AVENGED SEVENFOLD singer M. Shadows] when the record first came out and debuted at No. 1 and had nothing but good things to say about it,” the bassist said. “So, I mean, we’ve gotta be doing something right.”

AVENGED SEVENFOLD is getting ready to release both an animated series and a mobile game based around the band’s recently issued sixth album, “Hail To The King”. The series will consist of six episodes and will be available on Machimina‘s HappyHour channel on YouTube starting December 15. The series will serve as a prologue and back story for the group’s mobile game, “Hail To The King: Deathbat”, with M. Shadows saying, “We felt this was the best way to tell the story and give you all an idea about the type of game we are creating.”

The “Hail To The King” series was directed by Jon Schnepp, producer of the Adult Swim animated show “Metalocalypse”.

Both the series and game tell the story of AVENGED SEVENFOLD’s fictional mascot, the Deathbat.

The game will debut sometime in early 2014. Shadows said about it, “We wanted to bring the story of the Deathbat to life and allow you to control its destiny. While the game stands on its own in terms of the story and game play, we still wanted to add in some extras for our fans.”

The band recorded seven brand new songs for the game, which will also include 16 pieces of never-before-seen artwork from all the group’s albums that players can unlock.

“Hail To The King” sold 159,000 copies in its first week of release, giving the California band their second straight chart-topper after 2010’s “Nightmare”.