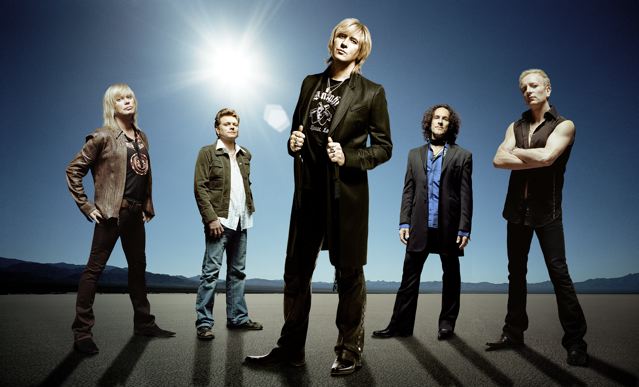 According to The Pulse Of Radio, contrary to Internet rumors, DEF LEPPARD will not be suing pop group ONE DIRECTION. Some fans are up in arms over the similarities between the ONE DIRECTION chart-topper “Midnight Memories” and DEF LEPPARD‘s 1987 track “Pour Some Sugar On Me”, which peaked at No. 2 in 1988. LEPPARD‘s two guitarists, “Sugar” co-writer Phil Collen and Vivian Campbell spoke to Billboard about the song, with Collen stating the songs are “very similar in structure” but nothing more. Campbell added: “The chords are one-four-five. Those are the blues. You don’t get more basic than that. I think what’s more reminiscent of the LEPPARD thing is the production, the sound, the vocals, the reverb and the way it’s assembled. That is very flattering that all of a sudden these kids think it’s a cool sound. I think a lot of people of their generation aren’t going to connect their music to ours.”

Phil Collen said that this situation isn’t the same as the similarities between and ROBIN THICKE‘s “Blurred Lines” and MARVIN GAYE‘s classic “Got to Give It Up”. “That’s different,” he said. “In fact, it’s got the mayonnaise jar and people hooting in the background which Marvin Gaye had. I don’t see that you can do that. The ONE DIRECTION one is very similar in structure, but it’s all good.”

Earlier this year, THE WHO was rumored to be contemplating a lawsuit against ONE DIRECTION for the production similarities between their “Best Song Ever” and “Baba O’Riley” — until Pete Townshend went public to dispel the rumors and state that he was flattered by them being influenced by his record.

DEF LEPPARD guitarist Phil Collen told The Pulse Of Radio he and his bandmates always look forward to playing their hits out on the road. “Every night when someone’s singing along — especially when there’s a lot of young kids there, 16-year-olds and that — it is fresh, actually makes you feel really good when there’s a whole new breed of people just singing away to songs that you’ve done,” he said. “It doesn’t really matter whether it’s a new song or an old song, it’s still our song, so it’s a huge compliment. It really is, it’s the best thing in the world.”