‘The Simpsons’ Creators Right A Wrong: ‘JUDAS PRIEST Is Not Death Metal’ 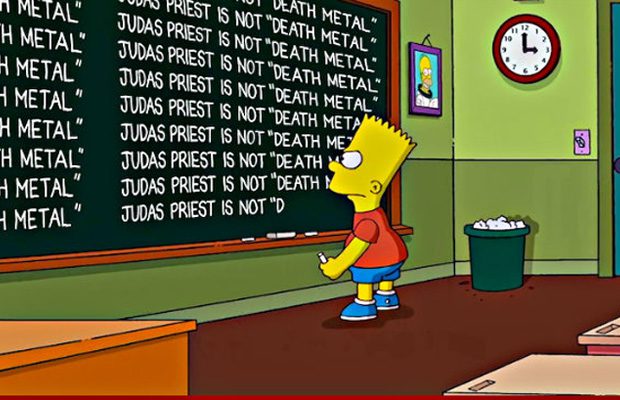 The writers for “The Simpsons”, one of the longest-running sitcoms in television history, have acknowledged their mistake in calling JUDAS PRIEST a “death metal” band on last week’s show and have made amends in the follow-up episode.

The cartoon’s January 5 installment, titled “Steal This Episode”, saw Homer getting involved in illegal film downloading, prompting the FBI to launch an anti-piracy investigation. When Homer‘s family sought refuge in a Swedish consulate, an overzealous FBI director in charge of anti-piracy subsequently went after him, and JUDAS PRIEST singer Rob Halford wound up singing a parody of the band’s classic “Breaking The Law” in an effort to nab Homer. “There’s only one surefire way to get fugitives out of a foreign building,” said the FBI agent. “Blasting death metal.”

“Swedes love death metal,” a headbanging consulate member said in the episode. “It reminds us of death!”

After last week’s episode aired, much of the metal community showed its disapproval online, making it clear that JUDAS PRIEST is not, and never has been, a death metal band. Word evidently got back to “The Simpsons” creators, who made amends by having Bart scrawl the words “Judas Priest is not ‘death metal'” repeatedly on the chalkboard in the introduction of this week’s episode.