LAMB OF GOD: ‘As The Palaces Burn’ Feature Documentary Film To Premiere In Philadelphia

Philadelphia’s Trocadero Theatre will host the world premiere of the LAMB OF GOD feature documentary film “As The Palaces Burn” on February 16. Capacity for this event will be limited to 800 people. Included in that capacity will be 50 VIP packages which will include a meet-and-greet with the band prior to the showing of the film.

The Trocadero Theatre was where LAMB OF GOD‘s platinum DVD, “Killadelphia”, was filmed, making the venue a natural choice for the movie premiere.

Besides being shown theatrically worldwide in 350 theaters, 13 U.S club venues have been chosen for exclusive screenings of the film. Tickets for all venues go on sale this weekend, except in Toronto which go on sale today. The cities and venues are:

For information on the location of all theaters as well as dates of screenings and show times, go to www.asthepalacesburn.com.

LAMB OF GOD entered into a worldwide distribution deal with Specticast (LED ZEPPELIN‘s “Celebration Day”, Paul McCartney‘s “Rock Show”) for their Don Argott-directed (“Last Days Here”, “Art Of The Steal”, “School Of Rock”) feature film “As The Palaces Burn”. Filming for the movie began in 2012 and concluded in March of 2013.

“As The Palaces Burn”, which should not be confused with the making-of documentary packaged with the recent re-release of the 2003 LAMB OF GOD album of the same name, was conceived to be a documentary focused on the power of music and its impact on cultures around the world and its ability to bring together people of all nationalities regardless of religious or political differences. After a worldwide casting call, filming took place in Colombia, Venezuela, Israel, India, and the United States. As filming reached its conclusion, the documentary was forced to take a major turn when the band’s lead singer, Randy Blythe, was arrested in the Czech Republic and charged with the murder of a fan in June 2012. Granted unique access to Blythe‘s saga, Argott‘s filming covered Blythe‘s 38-day imprisonment in Prague, his release and the band’s return to live performances, and finally Blythe‘s trial for murder in Prague in February 2013.

The trailer for the film can be seen below 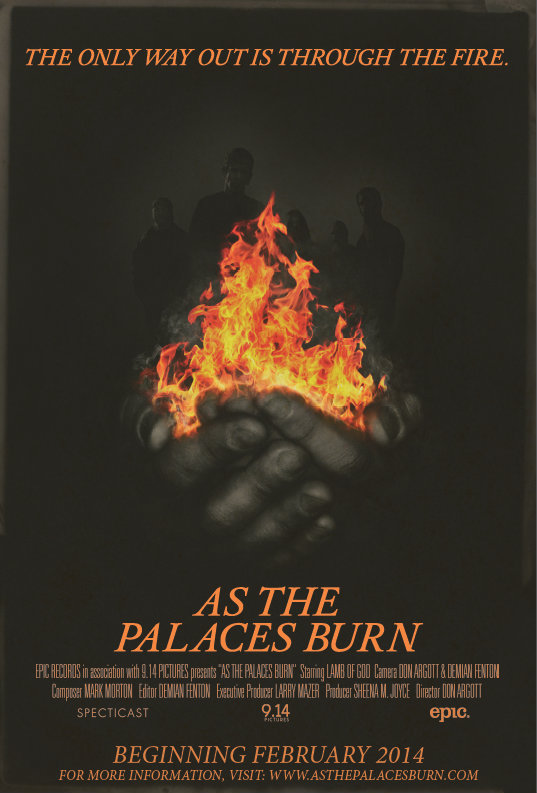