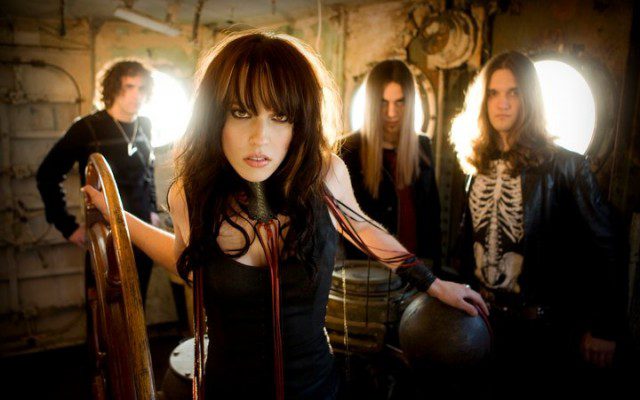 Scottish folk/power metallers ALESTORM have entered Lasse Lammert‘s LSD Studio in Lübeck, Germany to record their fourth full-length album, “Sunset On The Golden Age”, due in the early summer via Napalm Records.

“This is gonna blow all your expectations as to what an ALESTORM album is all about,” comments ALESTORM‘s Christopher Bowes (vocals/keytar).

“Over the past couple of years we’ve been writing non-stop, and we’ve come up with a ton of badass material.

“Some of this stuff is catchiest pirate party anthems you’ve ever heard, with choruses that’ll make you want to raise a pint of rum up high and sing your guts out. And for the fans of the epic stuff, we’ve got some songs that hit the 10-minute mark, with lyrical themes about historical events and crazy mythological madness. It’s gonna rule!”

ALESTORM‘s “Shipwrecked” video was filmed in Belgrade, Serbia with director Ivan Colic, who has previously worked with EPICA, KAMELOT and KATAKLYSM. The song comes off the band’s third album, “Back Through Time”, which was released in June 2011 via Napalm Records.

“Back Through Time” was produced by Lasse Lammert at LSD Studio. The effort was made available as a jewelcase, mediabook, LP, and special-edition boxset “featuring bonus tracks and other mad shite!”